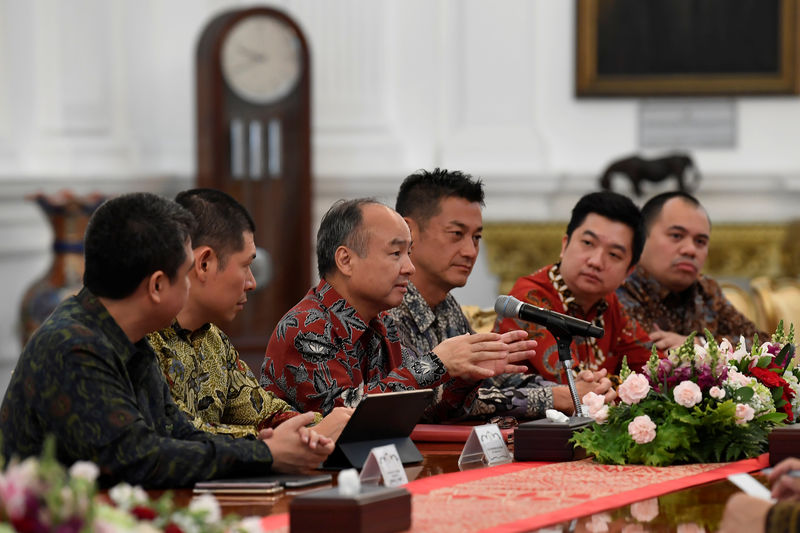 © Reuters. Founder and CEO of Softbank Masayoshi Son speaks during a meeting with Indonesian President Joko Widodo in the Jakarta Presidential Palace

JAKARTA (Reuters) – Southeast Asian breeding firm Grab said on Monday that it will invest $ 2 billion in Indonesia over five years at to use capital received from Japan's SoftBank Group Corp, which wants to increase exposure to the region's most populous market.

The investment will go towards creating a next-generation transport network and transforming how critical services, such as health services, are delivered, Grab said in a statement.

"SoftBank will invest $ 2 billion in the country through Grab, to drive the digitization of key services and infrastructure," said Grab headquartered in Singapore.

Earlier Monday, SoftBank chief Masayoshi Son told reporters that his company invested $ 2 billion in Grab. A SoftBank spokeswoman later said that Son referred to capital that had already been invested in Grab, and that he expressed his willingness to invest additional funds in the riding garden company.

Grab has raised nearly $ 3 billion so far from SoftBank and its Vision Fund.

Grab said the two companies will invest to create a transport network for Indonesia based on electric vehicles. Grab will also use the money to launch e-health services to improve access to doctors and medical services.

A doubling in Indonesia will intensify Grab's competition with the home-grown rival Go-Jek. Both technological start-ups have evolved from ride-hailing app operators to becoming one-stop shops for services that are as diverse as paying and delivering food.

"We want to study the opportunities. We are interested in electronic vehicles, batteries and charging systems," Son told reporters at the Jakarta Presidential Palace.

In the statement, Grab said it has invested over $ 1

billion in Indonesia since 2017. The company has been fundraising since buying the regional business of the US rival Uber Technologies (NYSE 🙂 Inc last year.
Disclaimer: Fusion Media will remind you that data on this site is not necessarily real-time or accurate. All CFDs (stocks, indexes, futures) and Forex prices are not provided by stock exchanges, but rather by market makers, and therefore prices may not be accurate and may differ from actual market prices, meaning that prices is indicative and not appropriate for commercial purposes. Therefore, Fusion Media will not be liable for any loss of trade you may incur as a result of using this data.

Fusion Media or anyone involved in Fusion Media will not be liable for any loss or damage as a result, depending on the information including data, offers, charts, and purchase / sale of signals on this site. Be fully informed of the risks and costs associated with trading in the financial markets, which is one of the most risky forms of investment possible.