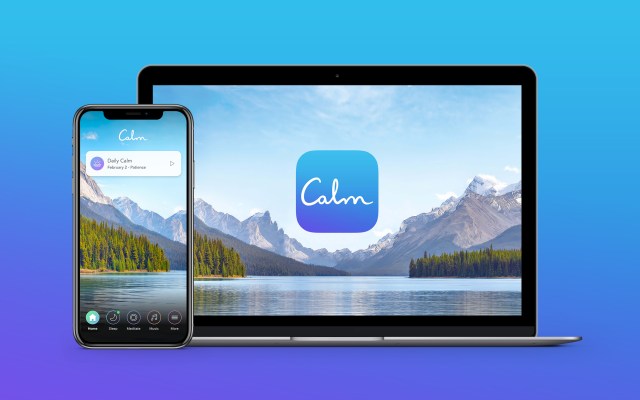 Calm, the meditation and wellness team that launched back in 2012, today announced the end of a $ 88 million series B funding with a $ 1 billion valuation. (We have not been able to clarify whether the valuation was post- or pre-money.)

Funding was led by TPG Growth, with participation from CAA and existing investors Insight Venture Partners and Sound Ventures.

As meditation grows in popularity across the United States – the CDC says it tripled from 4.1 percent in 2012 to 14.2 percent in 2017 – Calm has capitalized on mania by offering a series of mindfulness and wellness tools, from guided meditation sessions for a product called "Sleep Stories," Via a Subscription.

But Calm also meets stress where it lives. For example, the company invested $ 3 million in XPresSpa late in 201

8. XPresSpa is a chain of fast-paced spa stores found in airports. Meanwhile, Calm is collaborating with American Airlines to provide quiet content within the AA's entertainment system during the flight.

Growth at rest is difficult to deny. The company says it has topped 40 million downloads worldwide, with more than a million paying subscribers. Calm also says it quadrupled its revenue in 2018 – the company is now profitable – and is about to make $ 150 million in annual sales.

With the new funding, Calm's total amount increases to $ 116 million.

Here's what co-founder and co-director Michael Acton Smith had to say in a prepared statement:

We started as a meditation app, but have grown far beyond that. Our vision is to build one of the most valuable and meaningful brands of the 21st century. Health and well-being is a $ 4 billion industry, and we believe it is a great opportunity to build the leading company in this fast-growing and important space.

Cofounder and CEO Alex Tew said that funding will mainly go towards international growth and increased investment in content.