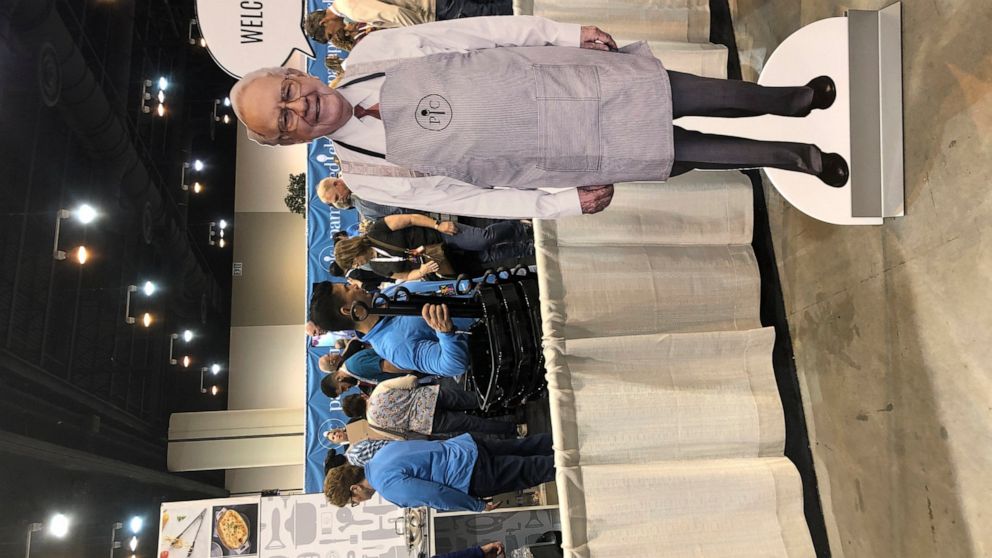 OMAHA, Neb. Warren Buffett gave Berkshire Hathaway investors some details on Saturday about how he spent more than $ 50 billion earlier this year and reassured them that the company he built will last long after the 91-year-old billionaire is gone.

Tens of thousands of investors packed an Omaha arena on Saturday to listen to Buffett and Berkshire’s deputies answer questions at Berkshire’s annual meeting that was back in person for the first time since the pandemic began, but attendance was probably less than when it used to be regular. attract more than 40,000.

Berkshire revealed in its earnings report Saturday morning that the mountain of cash shrank to $ 106 billion in the first quarter from $ 1[ads1]47 billion at the beginning of the year when Buffett invested $ 51 billion in equities.

Buffett told shareholders on Saturday that right after he wrote to them in his annual letter on February 26 that he was having trouble finding something to buy at attractive prices, Berkshire spent more than $ 40 billion on stocks over the next three weeks. including a day in early March when he spent $ 4.6 billion on top.

Buffett did not disclose everything he bought, but mentioned several highlights, including increasing Berkshire’s stake in oil giant Chevron to $ 26 billion, up from $ 4.5 billion at the beginning of the year to make it one of the conglomerate’s four largest investments. Berkshire also spent billions buying up 14% of Occidental Petroleum’s shares in the first half of March, contributing to its already huge investment in Apple shares.

Edward Jones analyst Jim Shanahan said that with the Chevron and Occidental investments combined, Berkshire has now invested more than $ 40 billion in the oil sector.

Even before Saturday, it was clear that Buffett was on the hunt because he agreed to buy the insurance conglomerate Alleghany for 11.6 billion dollars and made a new investment of several billion dollars in HP Inc. Buffett said on Saturday that he also bought three German shares, but not mentioned name. them.

Buffett said Berkshire was able to take advantage of the fact that Wall Street is largely run as a “gambling lounge” with many speculating wildly on stocks.

Buffett’s investment partner, Charlie Munger, said there has been an insane amount of speculation in the stock market over the past couple of years as the market has risen.

“We have people who know nothing about stocks advised by stockbrokers who know even less,” Munger said.

Buffett emphasized to shareholders that even with his track record of successful investments, he is not an expert on the timing of his investments to the market. Instead, he just tries to buy things that are sold for less than they are worth.

Buffett revealed on Saturday that he has invested heavily in Microsoft’s planned acquisition of Activision Blizzard. He said that a few months after one of Berkshire’s other investment managers bought about 15 million Activision shares, he increased his stake to about 9.5% of the company – or about 74 million shares – after Microsoft announced the deal in January because the Activision share was sold for less than $ 95 a share.

Although Berkshire is led by Buffett and the 98-year-old Munger, investors did not ask much about succession planning, perhaps because Buffett said a year ago that Vice President Greg Abel, who now oversees all of the company’s non-insurance businesses, will eventually replace him as CEO. Berkshire also has two other investment managers who will take over the company’s portfolio.

Buffett said he believes Berkshire’s decentralized culture, which is largely dependent on trusting people to do the right thing and avoiding major risks, will help the company thrive in the future, and many of the companies it owns as BNSF railroad and its great tools will remain faithful to finances.

“Berkshire is built forever. There is no end in sight,” Buffett said. “The new leadership – and the leadership after them and after them – are just guardians of a built-in culture.”

Investor Harris Kupperman, who heads the Praetorian Capital hedge fund, said he is not particularly worried about the future of Berkshire after Buffett because the eclectic conglomerate has a solid foundation.

“He built it as best he could build it. No one will ever be him. It is obvious, “said Kupperman.

He said that perhaps Buffett’s possible successor would be able to reconsider some long-term Berkshire investments that Buffett has had for decades and determine whether it still makes sense to hang on to things like the company’s huge Coca-Cola stake.

But the age of Buffett and Munger is always in the minds of Berkshire investors because there may not be too many more meetings with them both. Munger sat in a wheelchair during Saturday’s meeting.

“I really do not know how much longer they will be able to do this,” said Josu Elejabarrieta, 43, of Miami, who attended his first meeting.

Many of the questions Buffett and Munger received on Saturday covered topics they have been asked about before, and they mostly stuck to the kind of general life lessons and advice that have been featured at the General Assembly in recent years.

In response to concerns about the current high inflation, Buffett told investors that the best thing they could do is invest in themselves so that someone will always pay them for their services no matter how much a dollar is worth.

Buffett was not asked directly about the war in Ukraine, but he told investors that he is still concerned about the risk nuclear weapons pose to the world. But Buffett said he has no solution to the problem.

The four analysts surveyed by FactSet expected Berkshire to report an operating profit of $ 4277.66 per Class A share.

Janet Dalton from Overland Park, Kansas, said she has attended the meetings for decades. Her family has an even longer connection to the company because her father bought shares in the textile company Berkshire Hathaway even before Buffett took it over in 1965 and began to convert it into the conglomerate it is today. They never sold the shares, which are now being sold for almost $ 500,000 apiece.

Dalton said she misses the more detailed business answers that Buffett used to give at the previous meetings she attended.

“When I first came to the meetings, it was like getting a mini-MBA. Now it has become more general, said Dalton. But one of the things that makes her come back year after year is the chance to resume contact with friends and co-investors she has met at previous meetings.