Budweiser Clydesdales in Utah to celebrate Halloween, the end of 3.2 beers 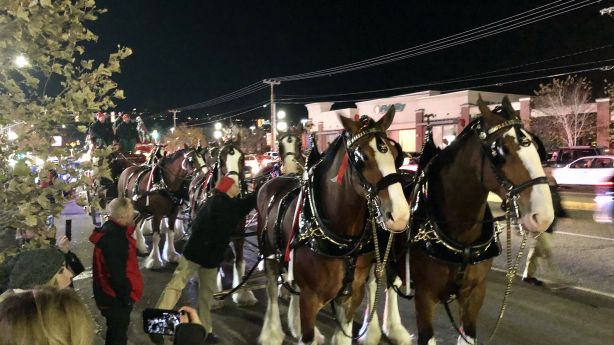 SALT LAKE CITY – The famous Budweiser Clydesdales will appear in Ogden on Thursday night at the Trick or Treat Streets celebration, a day after marching through downtown Salt Lake City as Utah prepares to transition to stronger store beer.

November 1 marks the first day of grocery stores in Utah and grocery stores can sell beer at the new, higher limit of 4 wt.% Alcohol (5 wt.% Alcohol) as described in SB132, passed by Utah law at the 2019 General Assembly. The iconic horses appeared in Salt Lake City to hold a "funeral" for 3.2 beers.

Accompanied by "pallbearers" in Halloween costumes, Budweiser trampled Clydesdales through the streets of Salt Lake and visited bars while Budweiser representatives handed out "obituaries" for 3.2 beers.

3.2% alcohol by weight limit has been in place since the end of the ban in 1933. Stronger beers are available on state-run wine monopoly, and the new law will transfer more popular beers, such as Stella Artois and Pacifico, from wine monopoly to corner store. [19659002] The state may have to destroy some unsold beer if anything less than 4% of beer remains after Thursday, because state wine monopolies can no longer carry that type.

The rise in legislation's alcohol limit came after several states, among the country's last holdouts, moved away from 3.2 beers in grocery and convenience stores. Kansas, Colorado and Oklahoma recently raised their boundaries, leaving Minnesota as the final state with a 3.2% ceiling.

Budweiser Clydesdales appears on Ogden's Historic 25th Street from 3.30pm to 7.30pm Thursday, with delivery to bars and restaurants. They will be available for photos as well, according to Ogden Center Alliance.

Trick or Treat Streets is a family-friendly event where downtown businesses decorate large fronts and hand out candy to trick-or-treaters.