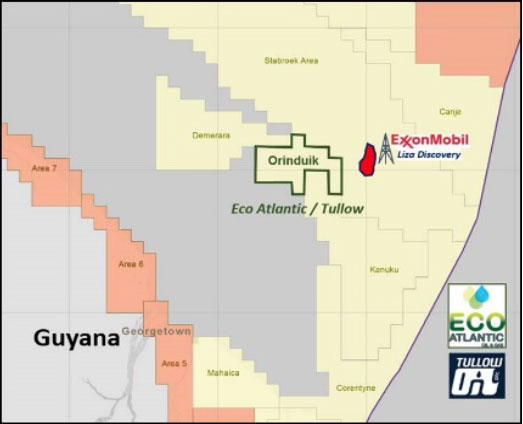 London-listed Irish explorer Tullow Oil on Monday said it has made a second oil discovery off the coast of Guyana after the Joe-1 exploration well successfully opened a new upper tertiary oil spill in the Guyana basin. [19659002Migrationfollower"SignificantandHighValueOilFindings"byTullowOilisinJethro-1letbrunnidetheareaofGuyanatilbakeiaugust

Angus McCoss, Survey Director, said: "I am very pleased that we have made the back-and-forth discoveries in the ground, and the discoveries in the back-and-back discoveries. in the Guyana Basin with our second well, the Joe-1 discovery and its prospects represent another area of ​​significant potential in the Orinduik block, and we look forward to the next phase of the program as we continue to unlock the multi-billion potential barrels in this area. "[1

9659002] Davy Stockbrokers said the findings support" a positive assessment of Tullow's exploration package in the Guyana area, "and" suggests well for the assessment programs expected to follow and the license's value contribution. "

Joe-1 exploration well was drilled by the Stena Forth drilling vessel, and evaluation of logging and sampling data has confirmed that Joe-1 has met 14 meters of net oil in high-quality oil-bearing sandstone reservoirs of upper tertiary age. Joe is the first the oil discovery made in the upper tertiary, Tullow Oil said, and robs the risk of the petroleum system west of the Orinduik block, where a significant number of tertiary and Cretan age prospects have been identified.

BREAKING NEWS: Tullow receives another oil to find off the coast of Guyana

“The Cooperative Republic of Guyana continues to be encouraged by the high rate of discovery in our country. Every Guyanese can rest assured that the government will continue to work conscientiously to pursue the most effective and effective marketing strategies for Guyanese's raw right to transform our economy and to implement sustainable development programs that all Guyanese can benefit from, ”said Dr. Bynoe. [19659002] "The future of Guyana is bright, but more importantly, the time is ripe for all Guyanese to focus on how they want to see their oil revenues spent and invested," Dr. Bynoe said.

The well was drilled on the Orinduik license, offshore Guyana by Tullow's wholly owned subsidiary Tullow Guyana BV Tullow Guyana BV is the operator of the Orinduik block with a 60 per cent ownership interest. Total E&P Guyana BV owns 25 percent, while the remaining 15 percent is owned by Eco (Atlantic) Guyana Incorporated.

When completed, Drena Forth drillships will leave Guyana and return to Ghana.