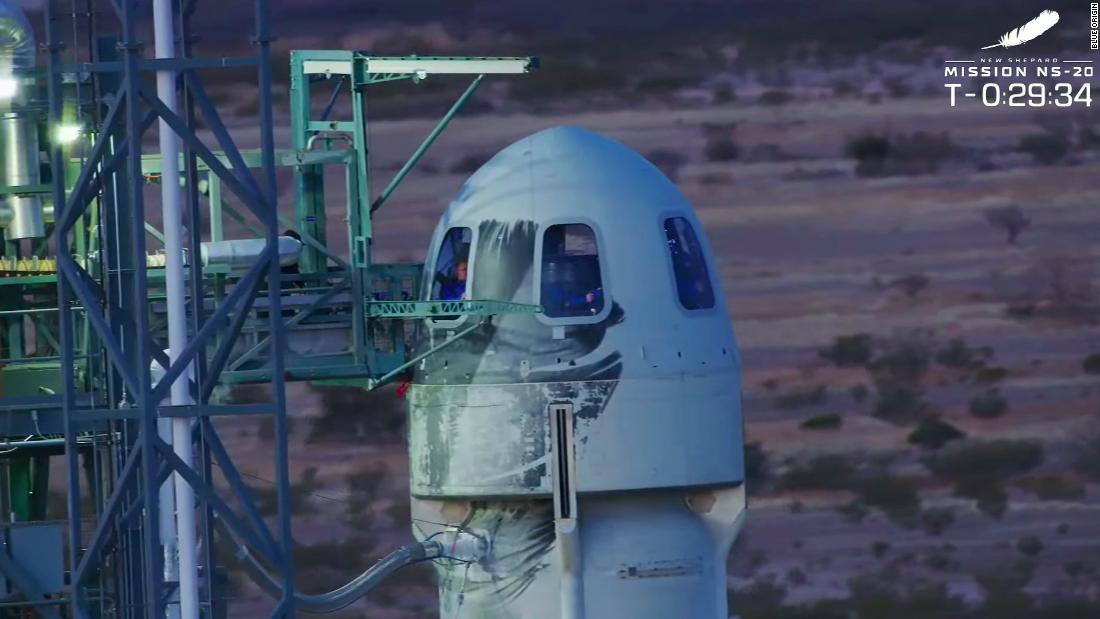 The six passengers, which include a Blue Origin engineer and five paying customers, are slated to take off aboard their Blue Origin New Shepard capsule Thursday after 9:30 am ET.

Those interested in catching the action – which is expected to look much like Blue Origin’s three earlier suborbital jaunts – can tune into Blue Origin’s webcast Thursday morning.

Boosted by a 60-foot-tall rocket, they will soar to more than three times the speed of sound, or more than 2,000 miles per hour. Their capsule will vault past the Kármán Line at 100 kilometers (or 62 miles) altitude, which is widely recognized as the altitude at which outer space begins. And at the peak of the flight, they̵[ads1]7;ll experience a few minutes of weightlessness and, out their window, sweeping Earthly views.

It’s not clear how much the trip costs the five paying customers. Blue Origin has not publicly disclosed a fixed per-seat price point, though it had auctioned off one ticket for $ 28 million. But that was for a seat to ride alongside Bezos himself, and the auction winner did not end up going. (He is slated to fly later this year, however.) Blue Origin’s direct competitor, Virgin Galactic, sells seats for $ 450,000.

This flight had been slated to include Saturday Night Live star Pete Davidson, but he dropped out of the mission after Blue Origin announced a schedule change earlier this month. The company cited the need for additional ground tests on the New Shepard rocket as the reason for the delay.

Gary Lai, who has been with Blue Origin for 18 years and holds several patents related to the New Shepard rocket’s design, flew in Davidson’s place and was the sole non-paying customer on the flight. Lai’s crewmates included Marty Allen, an investor and the former CEO of a party supply store; Jim Kitchen, an entrepreneur and business professor; George Nield, a former associate administrator for the Federal Aviation Administration Office of Commercial Space Transportation; Marc Hagle, an Orlando real estate developer, and his wife, Sharon Hagle, who founded a space-focused nonprofit.

What it all means

Business activity in space – largely led by SpaceX – is booming. From building cheaper rockets and designing new uses for satellites to imagining futuristic space hotels, the industry has attracted record levels of investment.
After years of quiet development, Blue Origin’s space tourism rocket made its crewed launch debut last year with Bezos, flying alongside a heroine of the space community, Wally Funk, as well as his brother Mark Bezos and a paying customer.
Since then, Blue Origin made headlines for flying other well-known names on two subsequent flights, including Star Trek star William Shatner and Good Morning America host Michael Strahan.

Blue Origin’s goal is to make these suborbital spaceflights a mainstay of pop culture, giving a 10-minute supersonic joyride to invited guests – who thus far have mostly been celebrities – and anyone else who can afford it.

Blue Origin is the first company to start offering regular suborbital space tourism flights. Its chief competitor, Virgin Galactic, notably had its first crewed flight – which included founder Richard Branson – before Bezos’ flight last July. But Virgin Galactic has yet to follow up that flight with another passenger flight after it later became clear that the company’s space plane had traveled out of its designated flight path. The company now says it’s undergoing unrelated technology upgrades and may return to flight later this year.

SpaceX is the only private company that offers trips to orbit. The company completed the first-ever all-civilian flight to orbit last September, taking a billionaire and three of his chosen crewmates on a three-day trip. And next week, the company plans to take four paying customers on a flight to the International Space Station, which orbits about 200 miles above Earth.
Blue Origin does have plans to build a rocket powerful enough to reach orbit, called the New Glenn. And, in light of the news that Russia may no longer sell rocket engines to the United States, those plans are more pressing than ever. The engines Blue Origin plans to use for the New Glenn, the BE-4, will also be used on an upcoming launch vehicle designed by United Launch Alliance, a joint venture between Lockheed Martin and Boeing that is responsible for significant US national security launches. ULA currently relies on Russian RD-180 engines. Its new rocket with the US-made BE-4 engines is scheduled to make its debut this year.

Blue Origin did not have specific updates on BE-4 when reached for comment.