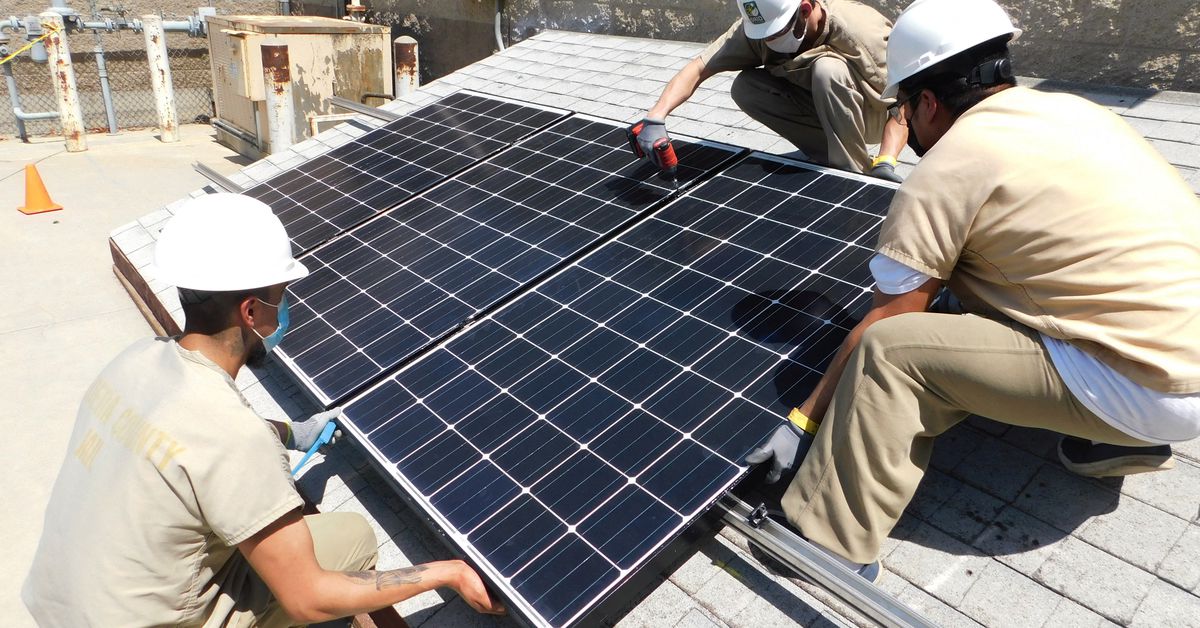 Jan 11 (Reuters) – U.S. clean energy companies are offering better wages and benefits, flying in trainers from abroad and considering ideas such as buying roofing and electrical shops just to hire their workers as firms try to overcome a labor shortage that threatens to to track off. President Joe Biden’s climate change agenda.

The Inflation Reduction Act, signed into law last year, provides an estimated $370 billion in subsidies for solar, wind and electric vehicles, according to the White House. Starting January 1, US consumers can take advantage of these tax credits to upgrade home heating systems or put solar panels on their roofs. These investments will create nearly 537,000 jobs a year for a decade, according to an analysis by BW Research commissioned by The Nature Conservancy.

But with the U.S. unemployment rate at a historic low of 3.5%, companies say they fear they will struggle to fill those jobs and that plans to move away from fossil fuels could stall. Despite notices of layoffs and signs of a slowdown elsewhere in the economy, the labor market for clean energy jobs remains tight.

“It feels like a big risk for this expansion. Where are we going to find all the people?” said Abigail Ross Hopper, president of the trade group Solar Energy Industries Association.

The shortage is expected to hit particularly hard in electric vehicle and battery manufacturing and solar panel and home efficiency installations, forcing some companies to take bold new approaches to finding workers.

Korea’s SK Innovation Co Ltd, which makes batteries for Ford Motor Co’s (FN) F-150 Lightning all-electric pickup in Commerce, Georgia, has pumped up wages and benefits as it boosts its US workforce to 20,000 people by 2025 from 4,000 today .

The battery maker is advertising between $20 and $34 an hour, above Georgia’s median hourly wage of $18.43, according to the US Bureau of Labor Statistics. It also covers 100% life insurance costs and matching retirement plans of up to 6.5%, above the national average of 5.6%, according to the Plan Sponsor Council of America. And the company provides free food at work.

“Georgia’s talent pool is not really huge. But we are trying to improve some of our policies to better acquire and retain workers,” said an SK official who declined to be named, citing the sensitivity of the matter.

Georgia state officials said SK’s hiring has been a success given how quickly production had to ramp up to meet the company’s obligations to automakers.

As national solar installer SunPower Corp ( SPWR.O ) recruits aggressively, Chief Executive Peter Faricy said the company is also looking at what he called “crazy ideas” to secure labor — including buying up companies just for its workers.

“I’m not suggesting we do this, but I’ll give you an order of magnitude of what we’re considering. Should we acquire a roofing company and turn them into solar installers? Should we buy an electrical company. and get 100 electricians?” he said.

SunPower also held talks over the past year with panel maker First Solar Inc ( FSLR.O ) to develop a solar panel that would be easier to install, allowing crews to equip two homes a day instead of just one, Faricy said.

“As much as you can game-ify the experience for the employee… it just makes the industry more fun, more attractive,” Chris McClellan, Sunrun’s senior vice president of operations, said in an interview.

Offshore wind developer Orsted (ORSTED.CO), a Danish company that plans to build projects off the east coast, hopes to fly in staff from projects in the UK and Asia to help with staff training. State reports have indicated that New York and Massachusetts face large gaps in their offshore workforce.

“We are creating a kind of ecosystem where we don’t just have an offshore wind academy, but really train the trainers of the future,” Mads Nipper, Orsted’s CEO, told Reuters.

The Biden administration has repeatedly promised that new green energy jobs will be well-paying union jobs.

But many of those jobs have lagged behind the fossil fuel industry in wages, according to a 2021 study by BW Research, as clean energy companies have sought to contain costs to compete with entrenched industries. The IRA seeks to address this by linking current wage and apprenticeship requirements to the subsidies.

These provisions – and the employment challenges – have put pressure on some employers to use unionized labour.

Learning from its previous hiring challenges in Europe and Asia, Orsted signed an agreement with North America’s construction unions to secure workers.

Even Amazon.com Inc ( AMZN.O ), a company embroiled in conflicts with workers trying to organize, has used union labor to build the electric charging infrastructure for its fleet of electric delivery vehicles in Maspeth, Queens, NY .

Corrine Case, an electrician represented by the International Brotherhood of Electrical Workers, said she was paid $43 an hour to install the charging system at Amazon.

Case, a single mother, said she was excited about the job security offered by the growing demand for electricians to install charging stations.

“Our field is constantly changing because of new energy sources, and to be a part of that is amazing,” she said.

In their hunt for workers, solar, wind and electric vehicle companies have expanded programs that offer free and subsidized training to military veterans, women and the formerly incarcerated.

SK told Reuters it has recruited at military job fairs and American Legion chapters and partnered with programs such as the Georgia National Guard’s Work for Warriors and the Manufacturing Institute’s Heroes MAKE America.

Some solar companies have sought to recruit veterans, saying the skills learned in military life translate well to industry.

In October, the nonprofit Solar Hands-On Instructional Network of Excellence (SHINE) teamed up with the Virginia Department of Corrections for a pilot program to train 30 prison inmates and newly incarcerated individuals in installing solar panels. SHINE’s director David Peterson said the group is discussing expanding the program.

In California, the nonprofit Grid Alternatives has trained 150 inmates at the Madera County Jail in solar installation since 2017 and is expanding the program this year to other facilities in the state. Potential employers are more open to hiring formerly incarcerated people when they see they’ve received some training, said Tom Esqueda, the nonprofit’s outreach manager.

In Los Angeles, the nonprofit Homeboy Industries, which works to rehabilitate ex-gang members, is using the potential job opportunities of solar panel installers to help recruits for its state-funded jobs program. Homeboy trains 50-60 people a year as solar cell installers.

More than 80% of people who have gone through the training in the past year have found jobs in solar energy, according to Jackie Harper, who oversees the program.

“I’m going to stick with this,” said Marco Reyes, 28, who went through the program after his release from prison in February and makes $23 an hour as an installer in Valencia, California.

He now plans to train in the electrical part of solar installation, which will increase his salary.

“Everyone has a chance to move up the ladder to a better position,” he said. “This job for me is a life changer.”