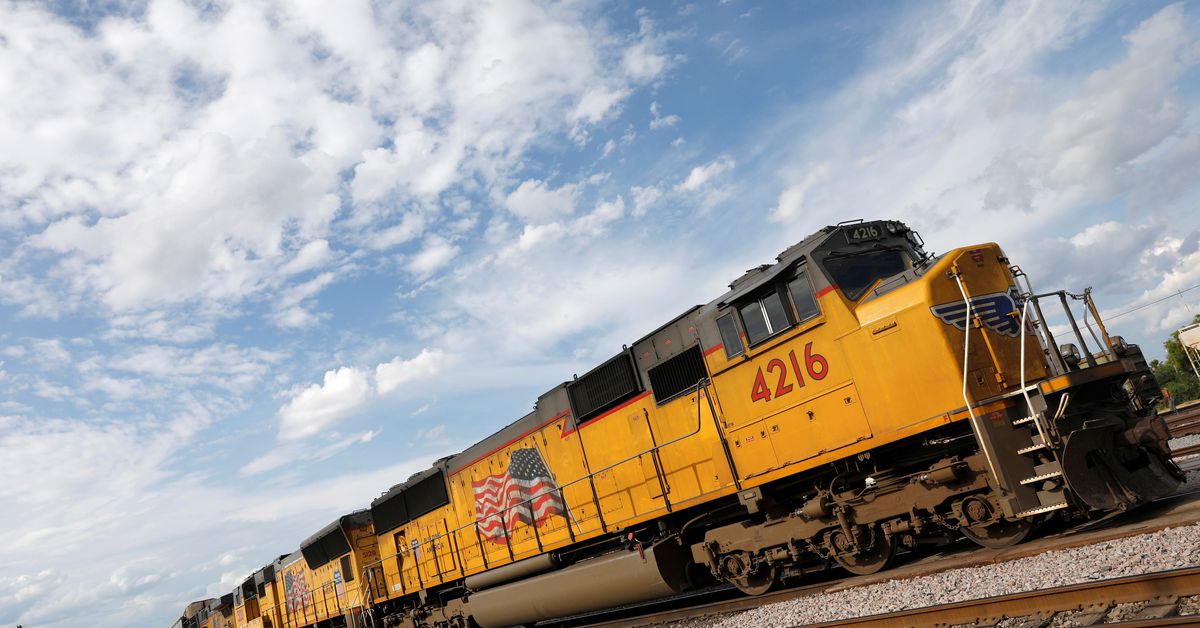 Railroads including Union Pacific ( UNP.N ), Berkshire Hathaway̵[ads1]7;s ( BRKa.N ) BNSF and Norfolk Southern ( NSC.N ) have until a minute after midnight Friday to reach agreements with three holdout unions representing about 60 000 workers before a work stoppage affecting freight and Amtrak could begin.

Talks between unions and railroads, which began at 9 a.m., were still ongoing more than 12 hours later after 9 p.m. ET Wednesday at the U.S. Department of Labor headquarters in Washington.

The talks are being overseen by Labor Secretary Marty Walsh, with input from other US officials. The parties ordered Italian food for dinner on Wednesday to continue discussions.

“Everybody’s going to have to move a little bit to get a deal done,” Buttigieg told reporters on the sidelines of the Detroit auto show.

A union representing about 4,900 machinists, mechanics and maintenance workers said Wednesday its members voted to reject a tentative agreement.

Rail workers have gone three years without a pay rise amid a contract dispute, while rail companies have posted solid profits.

In the ongoing talks, the industry has offered annual wage increases from 2020 to 2024, corresponding to a compound increase of 24%. Three out of 12 unions, representing about half of the 115,000 workers affected by the negotiations, are calling for better working conditions.

Two of those 12 unions, representing more than 11,000 workers, have ratified agreements, the National Carriers’ Conference Committee (NCCC), which negotiates on behalf of railroads, said Wednesday.

Unions are enjoying a surge of public and labor support in the wake of the pandemic, as “essential” employees risked COVID-19 exposure to keep goods moving and employers reaped big profits, labor and business experts say.

A shutdown could freeze nearly 30% of U.S. cargo shipments by weight, increase inflation, cost the U.S. economy as much as $2 billion per day and trigger a cascade of transportation problems affecting the U.S. energy, agriculture, manufacturing and retail sectors.

A freight train is seen near the U.S.-Mexico border, in Laredo, Texas U.S. June 3, 2019. REUTERS/Carlos Jasso

White House spokeswoman Karine Jean-Pierre told reporters aboard Air Force One that a shutdown of the freight train system would be an “unacceptable outcome for our economy and the American people and all parties must work to avoid just that.”

President Joe Biden’s administration has begun creating contingency plans to ensure supplies of critical goods in the event of a shutdown.

The stakes are high for Biden, who has vowed to rein in skyrocketing consumer spending ahead of the November election that will determine whether his fellow Democrats maintain control of Congress.

“Unless they get a breakthrough soon, railroad workers will go on strike this Friday. If you don’t think that will have a negative impact on our economy … think again,” said U.S. Sen. John Cornyn, a Republican and Biden- critic. .

Sen. Bernie Sanders objected late Wednesday to a Republican bid to unanimously approve legislation to prevent a rail strike, noting the profits the railroad industry has made.

If agreements are not reached, employers can also lock out workers. Railroads and unions could agree to stay at the bargaining table, or the Democratic-led U.S. Congress could step in by extending talks or establishing settlement terms. read more

House Speaker Nancy Pelosi said it was not clear whether Congress would step in, noting that the main issue is a lack of sick leave for workers.

Amtrak, which uses tracks maintained by freight railroads, said it would cancel all long-distance trips on Thursday and some additional state-subsidized trains. read more

Rail hubs in Chicago and Dallas were already congested and suffering from equipment shortages before the contract settlement. These bottlenecks back up cargo at US ports by as much as a month. And when the cargo arrives at rail hubs in places like Chicago, Dallas, Kansas City and Memphis, Tennessee, it can sit for another month or longer.

Reporting by David Shepardson and Lisa Baertlein; Additional reporting from Jeff Mason aboard Air Force One; Joe White in Detroit; Chris Walljasper in Chicago and Abhijith Ganapavaram in Bengaluru; Editing by Will Dunham, Jonathan Oatis, Bill Berkrot and Michael Perry