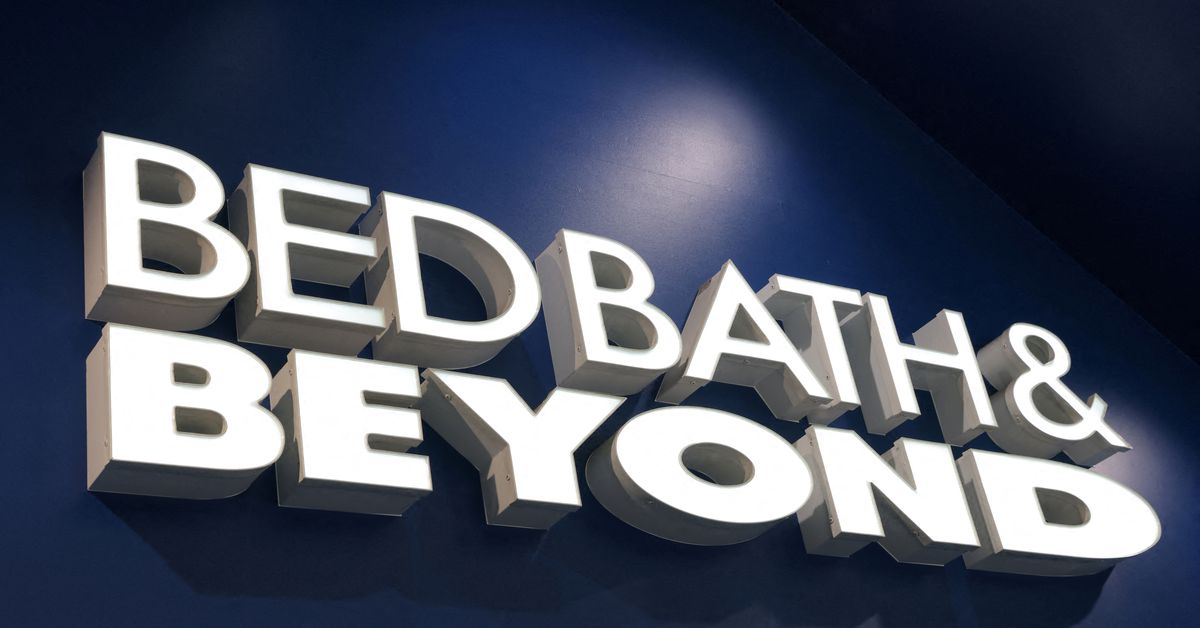 Aug 31 (Reuters) – Bed Bath & Beyond Inc ( BBBY.O ) said on Wednesday it closed deals for more than $500 million in new financing and will close 150 stores, cut jobs and overhaul its merchandising strategy in an effort to to turn around its money-losing business.

However, investors remain concerned that the retailer’s plan, announced in a strategic update, will do little to improve Bed Bath & Beyond’s business as shares fell 25%. The retailer also announced a plan to raise money by issuing new shares.

The big-box chain – once considered a so-called category killer in home and bath products – has seen its fortunes fail after an attempt to sell more of its own brand, or private label, goods. The COVID-19 pandemic, the supply chain crisis and consumers’ withdrawal from shopping due to soaring inflation also hit the chain’s sales.

Bed Bath & Beyond forecast a bigger-than-expected 26% drop in same-store sales for the second quarter and said it would keep its buybuy Baby business, which it had put up for sale.

Efforts to sell buybuy Baby had been encouraged by GameStop Corp ( GME.N ) Chairman Ryan Cohen, the company’s biggest investor until this month when he sold his 9.8% stake, sending shares tumbling.

Once known for giving many shoppers 20% coupons, Bed Bath & Beyond has revamped its merchandise in recent years to focus on private label products, including the Our Table cookware. read more

The chain is now abandoning that strategy, removing three of its private label brands, and re-prioritizing national brands with brands including Calphalon, Ugg, Dyson and Cuisinart underpinning that strategy, executives said on a conference call.

Executives said Bed Bath & Beyond is cutting about 20% of its corporate and supply chain workforce, eliminating the roles of CEO and store manager. The company has approximately 32,000 employees.

The summit sought to reassure analysts that suppliers continued to support the company, a key indication of its long-term financial prospects. Suppliers will ask for more money up front or stop shipping items if they believe retailers can no longer pay them.

“As we’ve managed through our cash burn, we’ve seen changes in suppliers we manage,” said CFO Gustavo Arnal, adding that the company is managing the situation “one by one.”

First-quarter sales plunged 25% and lost $358 million, leading to the firing of CEO Mark Tritton in June. The company hired Sue Gove, an independent chairman, to replace him on an interim basis.

On Wednesday, Gove said the retailer “continues to see significant positive momentum” and intended to build on its “deep legacy as a retailer.”

“While there is much work ahead, our roadmap is clear and we are confident that the significant changes we have announced today will have a positive impact on our performance,” she said on a conference call.

The retailer also said it extended an existing loan and received a new $375 million first-in, last-out loan, and would launch a stock offering of up to 12 million shares.

Arnal said 50 to 60 stores will be closed in a “first wave” heading into the balance of Bed Bath & Beyond’s fiscal year, which ends in February. The company has around 900 stores.

To improve its finances, the retailer said it would cut selling, general and administrative expenses by $250 million this year compared to last year and limit capital spending.

The company also estimates that comparable-store sales will fall 20% this year as it goes through the transformation.

“We are broadly satisfied that the measures announced today … will ease the pressure on the company so that it can continue to trade,” said Neil Saunders, GlobalData’s chief executive.