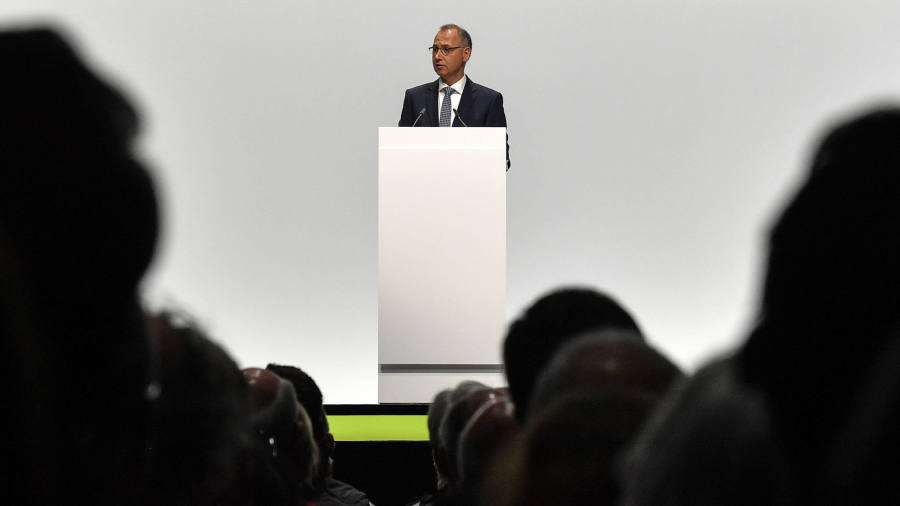 The board and board of the German conglomerate Bayer are under great pressure to regain the shareholders' confidence following an anesthetic of confidence in the company's bosses on Friday, which has no precedent in German post-war business history.

Investors expected their rage over 38 percent fall in Bayer's stock price since the agreement to buy US rival Monsanto closed last year. When one of Germany's most valuable companies is, Bayer is now worth only the $ 63 billion it paid for the American fright.

The German aspirin for crops chemical group has faced mounting of legal problems over glyphosate, a herbicide marketed by Monsanto under the brand name Roundup. Last month, a San Francisco jury found that there was a direct causal link between glyphosate and cancer. At the last count, Bayer was over 1

Ingo Speich, head of sustainability and corporate governance at Deka Investment, a top 10 shareholder in Bayer, said the company now needs to "reach out to investors."

"They must prove that they have seized things, that the integration of Monsanto works, and to achieve better results in the pharma department, "he told the Financial Times. Bayer must, he said, also provide more clarity on the extent of the potential legal damage it faced over glyphosate." to business as usual, the pressure of shareholders will only grow. "

Janne Werning from Union Investment, another Bayer shareholder, said investors were" extremely dissatisfied with the legal and reputable risk and massive decline in [Bayer’s] However, he said the management and the board had earned a "chance to deal with the risk and take the company back on a path of steady growth."

In a rare act of insubordination, the majority of Bayer's shareholders held on Friday ns general meeting refused to "discharge" the management. Voting against "Entlastung" or emissions is one of the strongest protests available to investors under German law, and Bayer chief Werner Baumann is the first serving director of a Dax-listed company suffering from such confidence.

Usually, the emission vote is a formality, where management routinely wins support of more than 90 percent of voting shareholders. If they get considerably smaller than that, they are often in trouble. Shortly after 39 percent of investors voted against taking over Deutsche Bank's management in 2015, Anshu Jain and Jürgen Fitschen chairmen were forced out.

On Friday, 55.5 percent of the investors present voted against ratifying Baumann and his team. Bayer's directors were also hit by rebellion, with only 66 percent voting to issue the board.

The voice is not legally binding, and few observers expect management to change after the uprising. At an extraordinary meeting on Friday night, Bayer's board said it was "unanimously behind" the management, according to a company statement.

The statement confirmed that several shareholders had questioned whether the Bayer management had considered the legal risk associated with glyphosate, but the board "is convinced that this is the case".

Others agreed that Baumann should not lose his job. "That would deep company into chaos," said Mr. Speich. "The next CEO will take a long time to learn the ropes and this at a time when they need to integrate Monsanto and their pharma pipeline comes to an end."

Union Investment's Mr Werning also said that a change of management "would increase the risk of a break-up" by Bayer and so "would not be in the interests of long-term investors".

Baumann defended the Monsanto acquisition Friday, saying it had made Bayer the world's most influential agribusiness. The company also began to benefit from synergies of € 1 billion a year, he said. He insisted glyphosate was safe, "if used properly".

But he acknowledged after the discharge vote that he had his work cut out to restore the investor's confidence. "We understand the mood of our shareholders and share their disappointment with the movement of the company's share price," he said in a letter to the staff quoted in the German press. "Of course, we will work very hard to win back the trust of the shareholders."