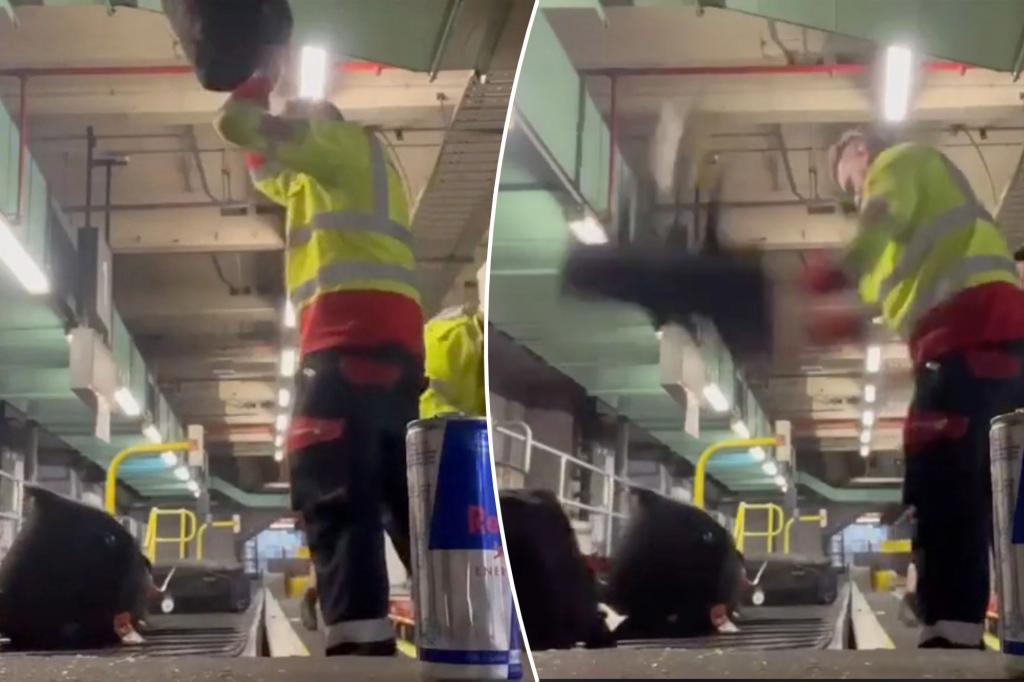 Australian baggage handlers have been issued a stern warning by the chief executive of a top national ground handling provider after shocking footage of mishandling emerged online.

Qantas and Swissport Australia have launched an “urgent investigation” after employees were filmed slamming luggage onto a conveyor belt.

The footage, believed to have been filmed at Melbourne airport, shows three baggage handlers – who have been stood down pending an investigation – throwing, kicking and slamming passengers’ luggage onto a conveyor belt.

Some bags are thrown so hard that they fall off the other side of the belt.

One man is shown laughing as another man lifts a bag over his head and slams it down onto his belt with force.

In another instance, one of the three handlers is shown throwing a bag a considerable distance down the line, despite the belt being right in front of him.

A Qantas spokesperson said the incident was “clearly not acceptable” and confirmed an “urgent” investigation was underway.

A spokesperson for Swissport said the workers involved had been suspended while they investigated what happened.

“Swissport trains and manages all employees to handle customer property with care and diligence,” they said.

“The actions of staff in the video appear to have been in breach of these service level standards.

“As a result, the affected employees have been made redundant pending an urgent investigation.”

“It is with regret that I inform you that evidence has emerged today that Swissport Staff is handling customer baggage in an unacceptable manner,” Moore wrote to staff.

“The behavior in the video let us all down – most importantly, of all our frontline staff who have worked so hard through (Covid) to ensure quality standards in sometimes challenging circumstances.

Moore assured staff that those who breached Swissport’s standards would be dealt with.

“Disrespectful behavior towards customers’ luggage and personal belongings will not be tolerated and will result in serious disciplinary action,” he said

“The individuals in the video have been suspended pending an immediate investigation.”

“Since the video was released, I have received many messages from team members across the network who share these concerns and express their commitment to our safety and service standards. We cannot allow the actions of a very small minority to undermine the first-class standards of the many.”

It comes after a turbulent year for the national airline, plagued by flight delays, cancellations and other high-profile incidents of lost luggage and mishandling, which were investigated by an ABC Four Corners investigation earlier this year.

People on social media were horrified when they responded to the confrontational footage.

“It’s sad but I honestly don’t expect any better from Qantas anymore,” said one.

“Is this like a competition who can destroy the luggage the fastest?” another due.

“You kidding me! Bet they would stink if someone treated their stuff like this,” added another.

Others suggested that the men should be fired for what appears to be complete disregard for other people’s property.

When are they going to be fired?” asked one.

“Looks like they don’t want to work anymore,” said another.

“I was working on the luggage and I’ve never ever seen anything like it, if I did I wouldn’t hesitate to get a supervisor.”