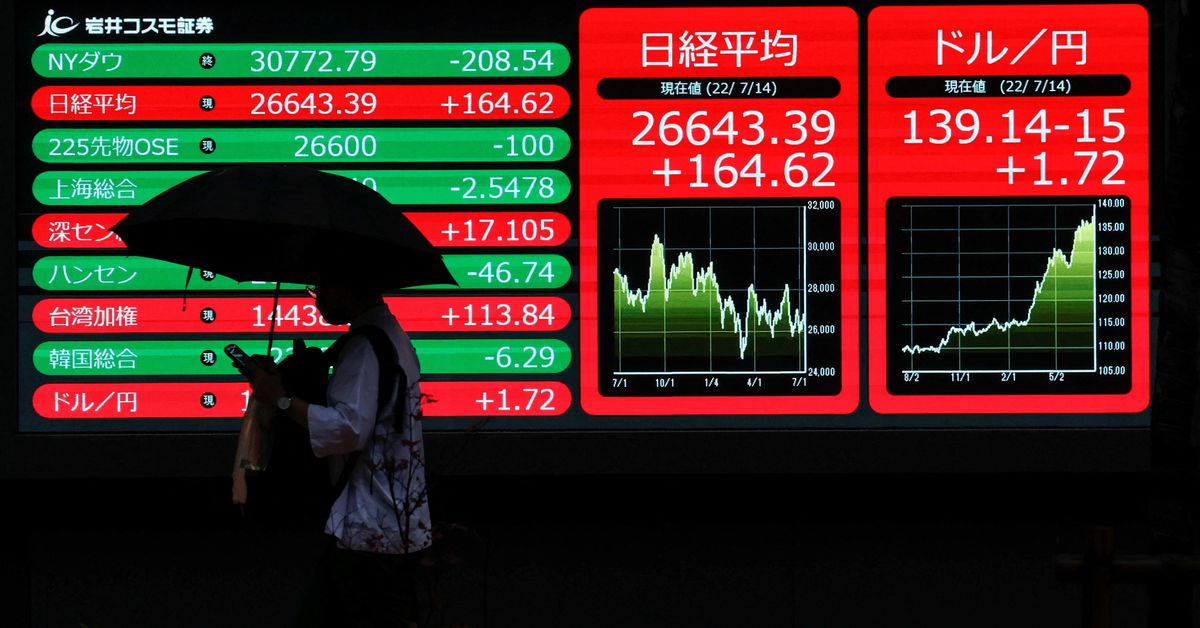 SYDNEY, Oct 17 (Reuters) – Asian stock markets fell on Monday after another jitter for Wall Street as investors braced for a further drastic tightening of global financial conditions, with all the risks of recession that would entail.

Concerns about financial stability added to the corrosive mix with all eyes on UK bonds now that the Bank of England’s (BoE’s) emergency buying spree has ended.

Prime Minister Liz Truss’ decision to sack her Chancellor of the Exchequer may help reassure investors, but her own fate is unclear with media reporting Tory lawmakers will seek to replace her this week.

BoE Governor Andrew Bailey warned at the weekend that interest rates may now have to rise by more than expected just a couple of months ago.

“The BoE made emergency bond purchases that are technically identical to QE with one hand, while furiously raising key interest rates with the other,” analysts at ANZ said in a note.

“Monday’s market action will provide a test not only of the survival of Truss’s low-tax vision, but also of her political future.”

While the S&P is an eye-popping 25% off its peak, BofA economist Jared Woodard warned that the slide was not over given that the world went from two decades of 2% inflation to a time of something more like 5% inflation.

“$70 trillion of ‘new’ technology, growth and government bond assets priced for a 2% world are vulnerable to these secular changes as ‘old’ industries like energy and materials ramp up, reversing decades of underinvestment,” he wrote in a note.

“Rotating out of 60/40 proxies and buying what’s scarce — power, food, energy — is the best way for investors to diversify.”

A red-hot US consumer price report and rising inflation expectations mean that the markets fully expect the Federal Reserve to raise interest rates by 75 basis points next month, and probably by the same again in December.

A number of Fed policymakers are speaking this week, so there will be plenty of opportunities for hawkish headlines. Earnings season also continues with Tesla Inc ( TSLA.O ), Netflix ( NFLX.O ) and Johnson & Johnson ( JNJ.N ), among others.

Goldman Sachs Group Inc ( GS.N ) is also reporting this week, and the WSJ reported that the investment bank plans to restructure its largest businesses into three divisions.

In China, the Communist Party Congress is expected to hand President Xi Jinping a third term, while there could be a reshuffling of top economic roles as incumbents approach retirement age or term limits.

In currency markets, the dollar remains king as investors price in US rates that top around 5%.

The yen has been hit particularly hard as the Bank of Japan sticks to its super-easy policy, while authorities refrained from intervention last week even as the dollar broke past the 148.00 level to 32-year highs.

The rise in the dollar and global bond yields has been a drag on gold, which was stuck at $1,648 an ounce.

Oil prices tried to bounce back, after falling more than 6% last week as fears of a slowdown in demand outweighed OPEC’s plans to cut output.