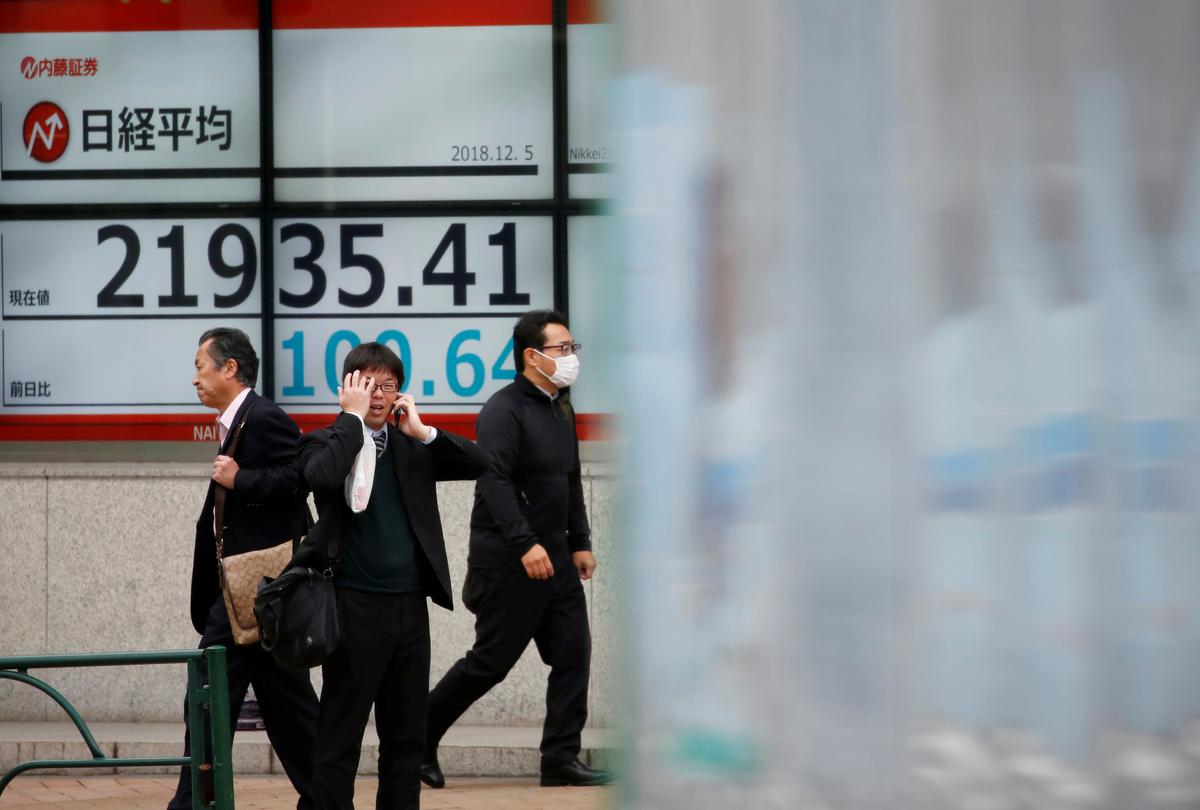 TOKYO (Reuters) – Asian stocks on Friday caught the tail of a Wall Street rally aided by China's solid export figures and a stabilization of the yuan, but fresh worries about China-US trade ties thanks to the region's gain.

Weighing the Risk Appetite was a report by Bloomberg that Washington is delaying a decision on licenses for US companies to restart trading with Huawei Technologies [HWT.UL].

It sent US stock futures up 0.6% in early Asian trading. They were last 0.4% lower on the day.

MSCI's broadest index of Asia-Pacific shares outside Japan was 0.2% higher, but on track to lose 2.3% for the week.

However, the optimism was pushed by the Bloomberg Report, raising concerns that deteriorating US-China relations could put an additional strain on an already fragile global economy.

"The news about Huawei triggered the yen increase," said Junichi Ishikawa, senior currency strategist at IG Securities in Tokyo. "This is a reminder that the US-China trade conflict is still a risk, and this risk has not diminished."

The yen strengthened as much as 0.4% against the dollar to 105.70 yen on concerns triggered by the Huawei report.

U.S. data pointed to a robust labor market as the number of Americans filing for unemployment benefits unexpectedly dropped last week, prompting some worries about a recession and helping government rates rise.

But others remained concerned about the prospect.

"About a month ago, I had a feeling that the world economy could pick up later this year, but now there is the risk of a downturn, which increases the chance of a recession," said Yoshinori Shigemi, global market strategist at JPMorgan Asset Management.

The offshore yuan remained stable against the dollar even after China's central bank set the yuan's daily midpoint to 7.0136 per dollar, the weakest level since April 2, 2008.

But traders continued to pay close attention to the headlines in the United States and China.

“The US and China trade wars are very serious. My hope is that the US and China can find enough to agree, so that they can contain the push-and-shove that occurs when the emerging power meets the dominant power. The alternative is not pleasant, says veteran investor Dan Fuss, vice president of Loomis Sayles.

The dollar index, which measures the greenback versus a basket of six major currencies, was little changed at 97,552, but on its way to the largest weekly decline since late June.

Sterling briefly hit its two-year low against the euro overnight after the Financial Times reported that Prime Minister Boris Johnson was preparing to hold elections in the days following the UK deadline to leave the EU on 31 October. [19659004] The pound was last quoted at 92.24 pence per euro, down 0.1% on the day, and was trading against the dollar at $ 1.2135, steady on the day.

In commodity markets, oil prices on Friday gave up some previous days' progress, but expectations of more production cuts from OPEC were expected to support prices. [O/R]

Spot gold held near a more than six-year peak on Wednesday, rising 0.5% to $ 1,507.40 per ounce as investors sought the safety of precious metal.