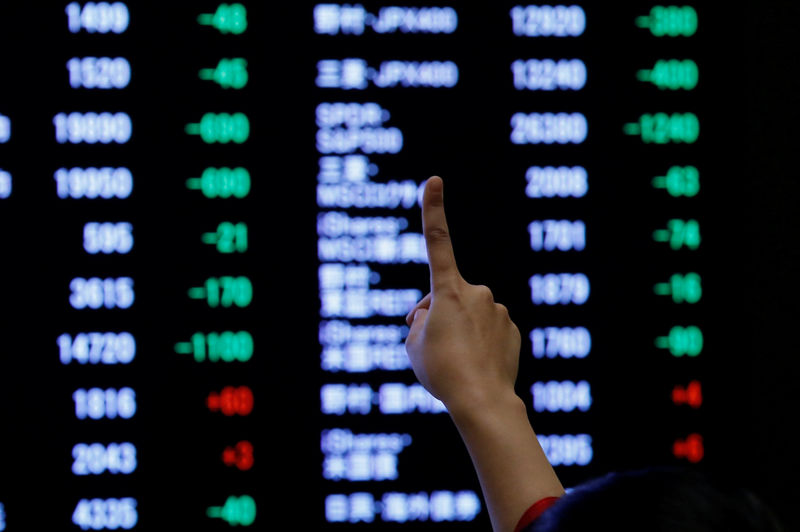 SYDNEY (Reuters) – Asian stock markets pushed higher on Monday as signs of progress in the Chinese and US trade distances reduced risk appetite, while pushing for safe haven bonds and the yen.

However, liquidity was lacking with Japan and a partial US market holiday for Columbus Day. MSCI's broadest index of equities in Asia and the Pacific off Japan () increased by 0.5%.

The sentiment had been strengthened when US President Donald Trump outlined the first phase of an agreement to end a trade war with China and suspended a threatened toll rise, though officials on both sides said much more work needed to be done.

The new agreement, which covers agriculture, currency and some aspects of intellectual property protection, would represent the biggest step for the two countries in 15 months. [19659002] "The substance is more in the direction of an expansion of the ceasefire – although it was the best the market could have hoped for," said Tapas Strickland, director of finance and markets at the National Australia Bank.

"Still, the" partial agreement "is unlikely to do much to give companies confidence in investment and hiring decisions in the United States or elsewhere," he warned. "As such, trade uncertainty is still likely to outweigh economic activity, and the Fed will cut interest rates to offset headwinds."

Futures mean around a 72% chance that the Federal Reserve will cut its interest rates at the meeting later this month.

Trading progress was still enough to pull safe-haven bonds with returns on US 10-year Treasuries that climbed 23 basis points last week to stand at 1.74% (). [19659002] The yield curve also strengthened as short-term interest rates were kept down by news that the Fed would start buying around $ 60 billion dollars a month in Treasury bills to secure "plenty of reserves" in the banking system.

Yen ease across the board and the dollar was steady at 108.40 early on Monday after hitting a 10-week peak around 108.61 on Friday.

The dollar did less well elsewhere, partly due to a sterling jump, and was last at 98.431 against a basket of currencies () after losing 0.5% last weight k.

The pound traded cautiously to $ 1.2608 after rising to a 15-week high of $ 1.2705 on Friday on optimism Britain could reach a deal on Brexit with the European Union.

However, Downing Street and EU officials said on Sunday much more work to secure a deal on Britain's departure from the bloc.

The two sides will hold several talks on Monday ahead of a summit for EU leaders in Brussels on Thursday and Friday.

Oil prices steady after jumping on reports that an Iranian state oil tanker had been attacked in the Red Sea.

Investors were also anxiously watching Turkey's invasion of Syria as the White House threatened to impose heavy sanctions on Ankara.