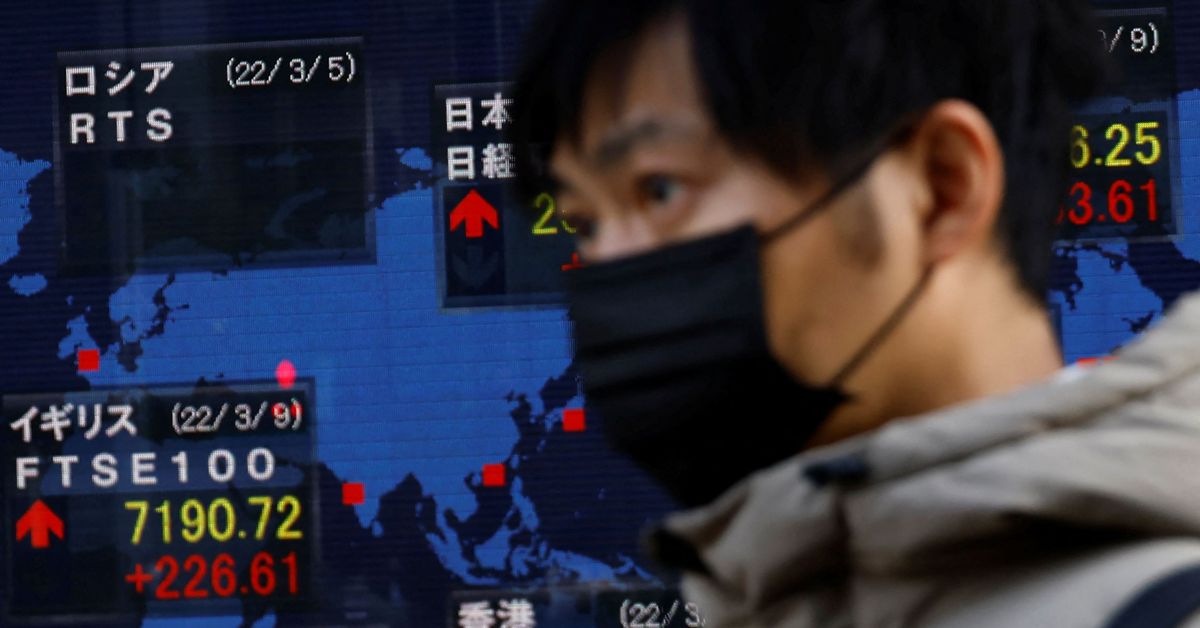 A man wearing a protective mask, amid the outbreak of the coronavirus disease (COVID-19), walks past an electronic board displaying various countries’ stock indices, including the Russian Trading System (RTS) Index which is empty, outside a brokerage house in Tokyo, Japan, March 10, 2022. REUTERS/Kim Kyung-Hoon

MSCI’s broadest gauge of Asia shares outside Japan ( .MIAPJ0000PUS ) returned to a 0.36% gain in afternoon sessions. Chinese stocks rose on reports that the country would set up a fund of up to $44 billion to help property developers. read more

Investors are also awaiting a likely 75 basis point rate hike by the Federal Reserve later this week – with markets pricing in around a 10% risk of a bigger hike, as well as waiting to see if economic warning signs lead to a shift in rhetoric.

“We’re leaning towards the view that 75 bps is most likely, but it won’t be the end unless they see some destruction of demand and some dampening of inflation,” said John Milroy, an investment adviser at Ord Minnett.

“We are afraid that they will have to further slow down the American economy.”

Major technology companies such as Apple ( AAPL.O ), Microsoft ( MSFT.O ) and Amazon.com are due to report earnings this week.

“The market has stabilized” from expectations of rate hikes, said Redmond Wong, Greater China market strategist at Saxo Markets in Hong Kong. – The focus is now on earnings.

In China, “maintaining stability is the key issue,” Wong said of likely outcomes from Politburo meetings expected to begin this week.

In currencies, the dollar was marginally softer but did not drift too far below recent milestones as uncertainty continued to swirl around interest rates and the economic outlook.

The euro rose 0.21% to $1.0240, but was hampered by uncertainty over Europe’s energy security, which is not helped by a looming cut in the westbound flow of Russian gas. read more

Oil prices rose further on expectations that Russia’s cut in natural gas supplies to Europe could encourage a shift to crude, with Brent futures up 1.27% to $106.45 a barrel and US crude up 1.26% to $97.92 per barrel. read more