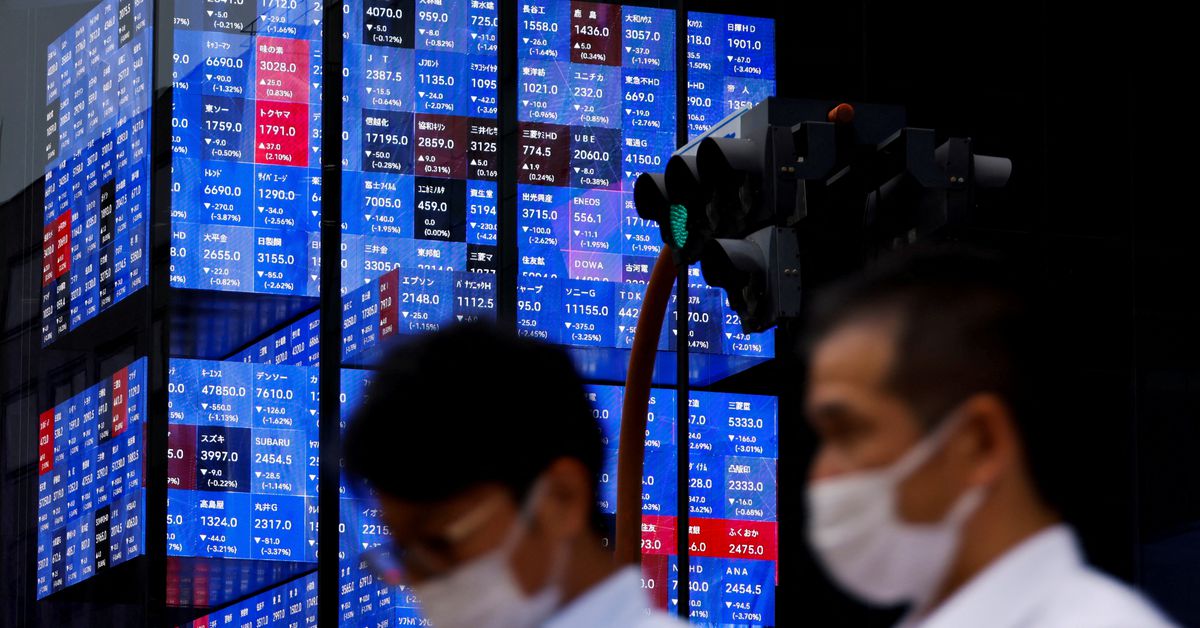 SYDNEY, Dec 5 (Reuters) – Asian shares extended gains on Monday as investors hoped steps to wind down pandemic restrictions in China would eventually brighten the outlook for global growth and commodity demand, pushing the dollar lower against the yuan.

The news helped oil prices firm as OPEC+ countries reaffirmed their production targets ahead of an EU ban and price cap on Russian crude, which begins on Monday.

There were also reports that Beijing could lower its threat classification for COVID-19, although there was a lack of clarity on timetables for future steps. read more

“While the easing of some restrictions does not yet equate to a wholesale shift away from the dynamic zero-covid strategy, there is further evidence of a shifting approach and financial markets appear to be strongly focused on long-term prospects in the short-term hit to activity as virus cases see likely to continue,” said Taylor Nugent, economist at NAB.

In fact, the 10-year yield has fallen 74 basis points since early November, effectively undoing much of the tightening of the Fed’s latest outsized hike in cash rates.

The markets are betting that Fed interest rates will peak at 5% and the European Central Bank around 2.5%.

“However, US and eurozone labor demand remains surprisingly strong, and together with a recent easing in financial conditions, risks are shifting towards higher-than-expected terminal rates for both the Fed and the ECB,” warns Bruce Kasman, head of economic research at JPMorgan.

“The combination of labor market resilience with steady wage growth increases the risk that the Fed will deliver an interest rate forecast above 5% at its upcoming meeting, and that Chairman Jerome Powell’s press conference will shift to more open guidance regarding near-term rate caps.”

The Fed meets on December 14 and the ECB the following day. In a speech on Sunday, French central bank governor Francois Villeroy de Galhau said he favored a half-point hike next week. read more

Central banks in Australia, Canada and India are all expected to raise interest rates at meetings this week.

The sharp decline in US interest rates has taken a toll on the dollar, which fell 1.4% last week on a basket of currencies to its lowest since June.

The dollar also fell below 7.0 yuan in offshore trading to hit a three-month low of 6.9677.

Oil prices jumped after OPEC+ agreed to stick to its oil production targets at a meeting on Sunday.

The Group of Seven and EU states are due to impose a $60-a-barrel price cap on Russian seaborne oil on Monday, although it was not yet clear what impact this would have on global supply and prices. read more