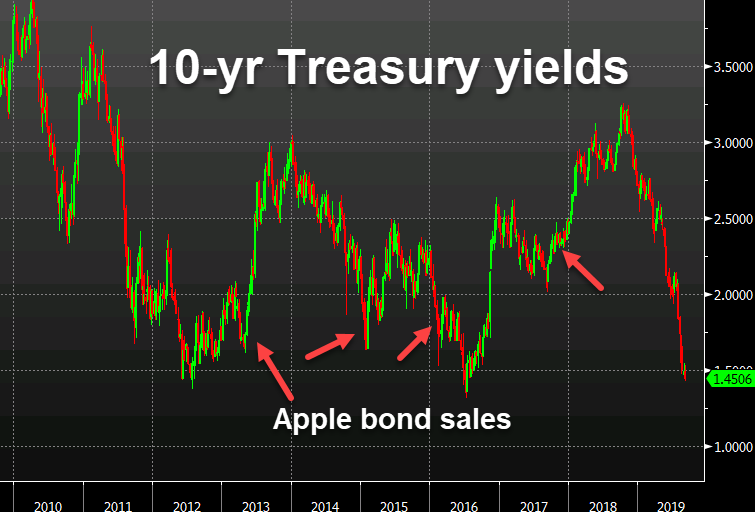 Companies have announced a wave of fundraising today through the corporate bond market, but the most notable is Apple, which will raise $ 7 billion in its first bond sale since 2017.

company dropped for the first time in the bond market in 2013 and has regularly collected more, although it has $ 300 billion in cash. The latest issue is a 5-party including $ 1.5 billion in 30-year bonds that will yield around 3%.

The money can be used for stock repurchases (they have around $ 100B authorized for repurchases), acquisitions or debt repayments.

In the bigger picture, Apple has an excellent track record of selling bonds at times when returns have fallen close to the cycle level. Could this be a sign that the fall in returns has gone too far?

Their sales of foreign bonds have been mixed. In September
In 2016, they sold EUR / USD bonds at EUR 1.1270. The currency rose to 1.25 two years later before falling to levels in recent months. Yield in Europe has continued to decline.

In November 2014,
Apple sold Yankee bonds for the first time at EUR / USD 1.25 in what was one
well-established sales in the foreign exchange market, but German base rates continued to
falls to almost 0%.