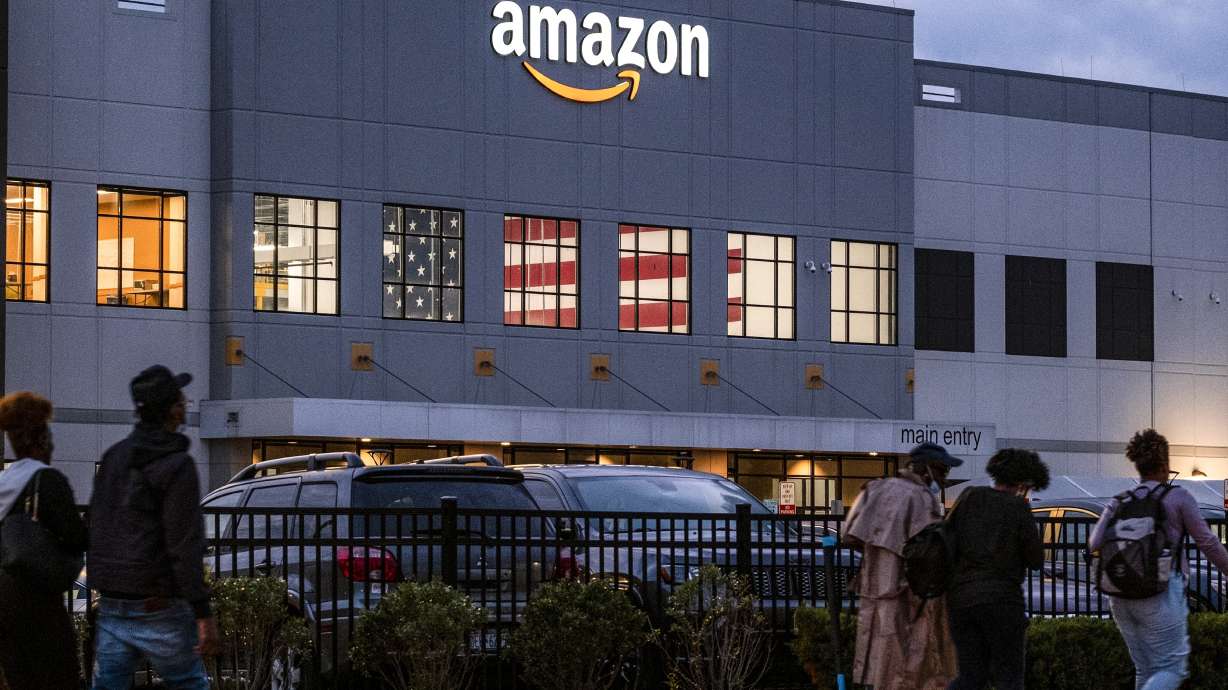 People arrive for work at the Amazon distribution center in the Staten Island borough of New York, on Oct. 25, 2021. Amazon plans to file objections to the union election on Staten Island, NY, that resulted in the first successful US organizing effort in the company’s history. (Craig Ruttle, Associated Press)

NEW YORK CITY – Amazon is seeking to overturn the historic union victory at one of its New York City warehouses, arguing in a legal filing Friday that union organizers and the National Labor Relations Board acted in a way that tainted the results. It now wants to redo the election.

The e-commerce giant listed 25 objections in the filing obtained by the Associated Press, accusing organizers with the nascent Amazon Labor Union of intimidating workers to vote for the union, a claim an attorney representing the group has called “patently absurd.”[ads1];

“The employees have spoken,” Eric Milner, the attorney, said in a statement Thursday after Amazon’s initial planned objections were made public in another legal filing.

“Amazon is choosing to ignore that, and instead engage in stalling tactics to avoid the inevitable – coming to the bargaining table and negotiating for a contract” on behalf of the workers, he said.

Warehouse workers in Staten Island cast 2,654 votes – or about 55% – in favor of a union, giving the fledgling group enough support to pull off a victory last Friday.

In one objection, Amazon said organizers “intentionally created hostile confrontations in front of eligible voters,” by interrupting the mandatory meetings the company held to persuade its employees to reject the union drive. In a filing released earlier this month, the company disclosed it spent about $ 4.2 million last year on labor consultants.

In another objection, Amazon targeted organizers’ distribution of cannabis to workers, saying the labor board “cannot condone such a practice as a legitimate method of obtaining support for a labor organization.” New York legalized the recreational use of marijuana last year for those over 21. Milner, the attorney representing the union, said Amazon is grasping at straws.

“Distributing cannabis” is no different than distributing free T-shirts and it certainly did not act to interfere with the election, “he said.

The retailer had initially signaled it planned to challenge the election results because of a lawsuit filed by the National Labor Relations Board filed in March, in which the board sought to force Amazon to reinstate a fired employee who was involved in the union drive.

Amazon pointed to the lawsuit in one of its objections filed Friday, saying the regional National Labor Relations Board office that brought the suit “failed to protect the integrity and neutrality of its procedures,” and had created an impression of support for the union by seeking reinstatement for the former employee, Gerald Bryson.

“Based on the evidence we’ve seen so far, as set out in our objections, we believe that the actions of the NLRB and the ALU improperly suppressed and influenced the vote, and we think the election should be conducted again so that a fair and broadly representative vote can be had, “Kelly Nantel, an Amazon spokesperson, said in a statement Friday.

All NLRB enforcement actions against Amazon have been consistent with that Congressional mandate.

Bryson was fired in the early days of the pandemic after leading a protest calling for the company to do more to protect workers against COVID-19. While off the job during the protest, Bryson got into a dispute with another worker and was later fired for violating Amazon’s vulgar-language policy, according to his attorney Frank Kearl.

“All NLRB enforcement actions against Amazon have been consistent with that congressional mandate,” she said.

In other objections, Amazon targeted how the labor agency conducted the election. It said the agency failed to control media presence around the voting area and did not have enough staff and equipment, which the company says created long lines and “discouraged many employees from voting in subsequent polling sessions.”

Meanwhile, both Amazon and the Retail, Wholesale and Department Store Union, a union that spearheaded a separate union drive in Bessemer, Alabama, have filed objections to that election. The final outcome of the union vote in Alabama is still up in the air with 416 outstanding challenged ballots in the balance. Initial results show the union down by 118 votes, with the majority of Amazon warehouse workers rejecting a bid to form unionize.

The Retail, Wholesale and Department Store Union, which filed more than 20 objections, said in its filing Thursday that its objections are “grounds to set the election aside.”

A hearing to review the challenged ballots is expected to begin in the coming weeks.