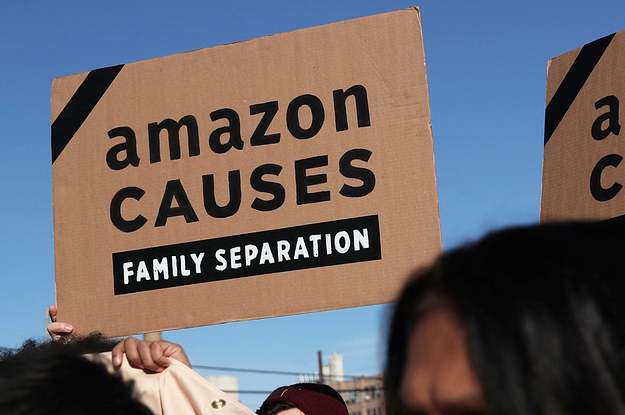 A little over a year has passed since an alliance of about 500 Amazon employees first asked the company to leave their contracts with the authorities. Now they protest again. This week, the 2018 petition was recycled inside Amazon to We will not build that mailing list and other staff resource groups in a letter that included claims to stop companies, such as computerized Palantir, contracting directly with ICE from using Amazon Web Services technology and a point of action: "Take a public stand against these human rights violations and make a statement to put their position against the ICE camps, mass struggles and deportations."

Sources in the company told BuzzFeed News it was inspired by recent news reports about the bad conditions in the International Center for Immigration and Customs Prosecution (ICE) and threats of forthcoming deportations.

Amazon, which usually takes a perfunctory view of such employees' outbreaks, has so far not provided any indication that it will rethink the provision of services to Palantir and other law enforcement agencies. Instead, the company argued that the government should decide what constitutes "acceptable use" of technology of the type it sells.

"As we have said many times and continue to believe strongly, businesses and government organizations must use existing and new technologies responsibly and legally," Amazon said in a statement to BuzzFeed News. "There is a clear need for clarity from governments on what which is acceptable use of AI and consequences for abuse, and we have proposed a law for this. We are still eager for the government to give this further clarity and legislation and will continue to offer our ideas and concrete proposals. "

Protests Against ICE Interrupted an Amazon Conference in New York Friday, Wall Street Journal reported. On Monday, activists with the same message are planning to protest outside Amazon's CEO Jeff Bezo's new Manhattan apartment, according to a press release. Prime Day, a sales event that generated over $ 4 billion in sales to the reseller in 201

It is worth noting that opposition to public contracts is not consistent across all Amazon employees. Some employees said they would not oppose selling technology to law enforcement in general, others said they supported ICE's mission to enforce immigration laws, and some employees over the issue were heated, according to a source inside the company.

Other technology companies including Google and Microsoft, have also been targets for employee activism regarding their contracts with government, and Amazon also has hay rt other complaints from their workforce. Thousands of employees have signed a petition that pushes the company to take action against climate change, and some of the signatories will join Amazon stockists in a Prime Day strike in Minnesota on Monday.

Read the entire text of the staff letter here:

In June 2018, a group of affected Amazon sent a letter to JEff Bezos and Andy Jassy, ​​demanding that AWS:

Since then, the company has shot away at every opportunity from recognizing this letter signed by more than 500 employees. When confronted with these issues in a company all over, Andy Jassy said: "We feel very good and very strong at the value Amazon Recognition provides our clients with all sizes and types of industries in law enforcement and without law enforcement." More recently, he added that "just because technology can be abused does not mean that we should ban it and condemn it," comparing Recognition to a knife: "you can use a knife in a supperititio's way". As the Amazon, we are told to take ownership of our work, which means we never say it's not my job. Transferring money to the responsibility for the effect of our work is not Ownership.

Our requirements have become even more urgent with the latest news. The US government has arrested people, including small children and concentration camps under terrible conditions. Reports of the described extreme overpopulation hammer a unit contained 900 people, and a room design for only 125), freezing temperatures (facilities are regularly referred to as "hieleras" or "ice boxes"), and cruelty from guards in these detention centers. When congressmen recently visited a facility, they learned that the deprived women were "told by agents to drink from the toilets" if they wanted water. This is a cruel human rights violation – and it is run by the AWS.

Palantir, which runs on AWS services, provides the technical infrastructure that ICE uses to collect and process information on people targeted at deportation. A 2016 law disclosure revealed that enforcement and removal operations (ERO), the primary deportation arm of ICE, uses Palantir's systems to gather information for their cases.

The AWS Acceptable Use Policy states that "any illegal activity that violates Andreas's rights, or which may be harmful to others, our business or reputation, may be grounds for" suspending or terminating "the use of our services.

Palantirdirectly Allows ICE to "violate the rights of others" by driving deportation processes that round out immigrants and putting them into concentration camps. In addition, hosting Palantir "damages our reputation" because it hurts customers' trust and leads to negative publicity. To continue to host Palantir despite clear evidence of ongoing rights violations arising from their products, AWS does not choose to enforce the Terms of Use.

AWS has already fired other customers from the similar breach platform. potential he "puts at risk of innocent people." If WikiLeaks crosses the line by posting leaked documents (because AWS meant that can contribute to harm), Palantir has surely crossed that line by collaborating directly with an agency that demonstrably puts vulnerable people at risk.

Cross-industry workers continue to resist having their work used to drive these abuses, and the Amazon are proud to be with them. Wayfair employees have protested against their companies, contracting with ICE, while Microsoft and Salesforce employees are organizing to stop the company's respective border contracts. The time to act is now.

We require that Palantir be removed from the AWS for breach of our Terms of Service. We urged Amazon to take a public stand against its human rights violations and make a statement establishing the position against the ICE camps, mass struggles, and deportations.

The world looks at the abuses in ICE's concentration camps unfold. We know our company should, and can, do better.

Join and call to stop our cooperation with ICE by signing "We will not build that letter".