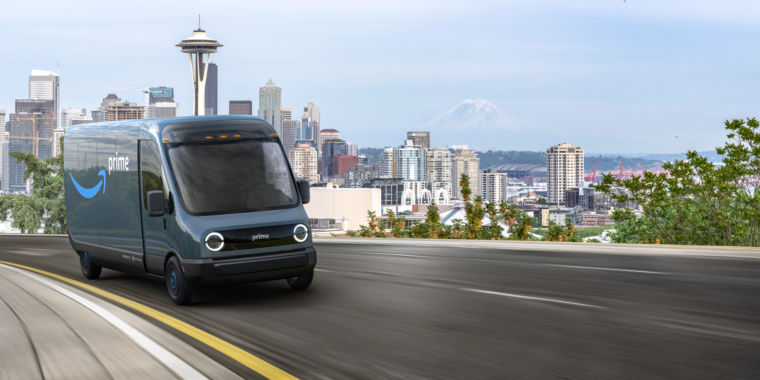 Amazon has ordered 100,000 electric trucks from startup Rivian, the e-commerce giant announced Thursday. The order is part of Amazon's greater promise – also announced today – to achieve zero net carbon emissions by 2040. Amazon aims to use 80% renewable energy by 2024 and 100% by 2030.

Rivian is an electric startup vehicles that are first focused on trucks and SUVs. Amazon led a $ 700 million funding round for the company earlier this year.

Rivian unveiled the first two products late last year: a pickup truck called the R1T and an SUV called the R1S, both of which are intended to have an area as far as 400 miles. The pickup is expected to start at $ 69,000 (for a shorter-range model), while the SUV will cost $ 72,500 and up. Ars Technica declared R1T the best truck at this year's New York International Auto Show and named Rivian the star of the show.

Amazon's 100,000 vehicle order is apparently for a custom design that is more suitable for parcel transport. Press images show a bulky van with a large "Prime" logo on the side.

Partnership is an important part of Rivian's business strategy. At the top of the $ 700 million Amazon-led investment round in February, Rivian raised another $ 500 million from Ford in April. This deal envisages Ford using Rivian's platform to build a future electric truck.

Rivian will probably need all this money and more to become a major carmaker. Producing cars costs billions of dollars, as electricity images Tesla has learned over the past 15 years. Tesla already has an SUV – Model X – and is working hard on another SUV, pickup and semi truck.