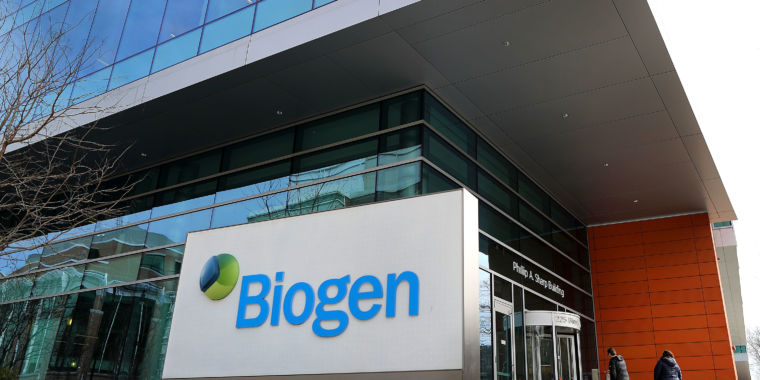 1; despite flaming a "futility analysis" and being abandoned by the manufacturer just a few months ago.

In March, biotech company Biogen halted two phase III clinical trials of the antibody drug aducanumab after analysis of preliminary data suggested it was destined to fail. The decision to ditch the closely monitored drug sent Biogen's future and stock in a tail spin. Shares fell more than 25% the day of the announcement, cutting roughly $ 18 billion from the company's market value, according to Bloomberg at the time.

But that decision in March was based on data collected through December 2018. Further data from the intervening months continued to roll in – and it told a different story, according to Biogen.

Those who received higher doses of aducanumab "experienced significant benefits in measuring cognition and function such as memory, orientation, and language," the company reported. These patients also saw benefits from daily activities, such as managing their personal finances, cleaning, laundry, shopping and traveling outside their homes.

In a statement, CEO of Biogen Michel Vounatsos said:

With such a devastating disease affecting tens of millions worldwide, today's announcement is truly encouraging in the fight against Alzheimer's. This is a result of groundbreaking research and is a testament to Biogen's steadfast willingness to follow science and make it right for patients. We are hopeful about the prospect of offering patients the first treatment to reduce the clinical decline of Alzheimer's disease and the potential implications of these results for similar approaches to amyloid beta.

Biogen said it expects to submit the drug for FDA approval in early 2020. The news sent Biogen's shares hovering 42% early Tuesday, leaving it where it was before the crash in March.

Biogen states that reversal of wealth declined to more data on patients given high doses of aducanumab. These data came from two separate studies, called EMERGE (which included 1,638 patients) and ENGAGE (which included 1,647 patients). Both were phase III multicenter, randomized, double-blind, placebo-controlled, parallel-group studies that tested the safety and efficacy of 18-month regimen of aducanumab in two different doses.

Prior to these trials, research suggested that aducanumab may remove the clumps of goopy amyloid-beta peptides that accumulate in the brain of Alzheimer's patients. However, removing the lumps from the blood vessels in the brain with the potential risk of damaging the vessels, which can trigger immune responses and swelling.

As Ars reported in 2016, results of a Phase I study seemed to confirm this risk. Although the drug cleared out the lumps, the higher the dose of aducanumab in the trial, the more signs of brain swelling and bleeding – which turns out to be ARIA-E, or amyloid-related imaging disorder edema.

The phase in the trial started with 165 participants, 32 of whom received the higher dose. Of these, 15 developed ARIA-E, and 10 patients dropped out of the study due to side effects, a troublesome sign.

The problem persisted in the two phase III trials. ARIA-E and headache were the most frequently reported adverse reactions in both, and the early data were largely from lower-dose patients who were less likely to develop ARIA-E.

Nevertheless, the additional data had several results from patients receiving higher doses. Together, they tipped the scales to show that the higher doses led to a "significant reduction in clinical decline from baseline." However, the results were only statistically significant for one of the two studies (EMERGE, not ENGAGE).

The company states that it has been in discussions with the FDA about filing the drug for approval.

There are currently no approved therapies that can reduce the effects of Alzheimer's, affecting about 5 million Americans. Any new treatment that hits the market is expected to make billions of dollars in sales, according to Reuters.