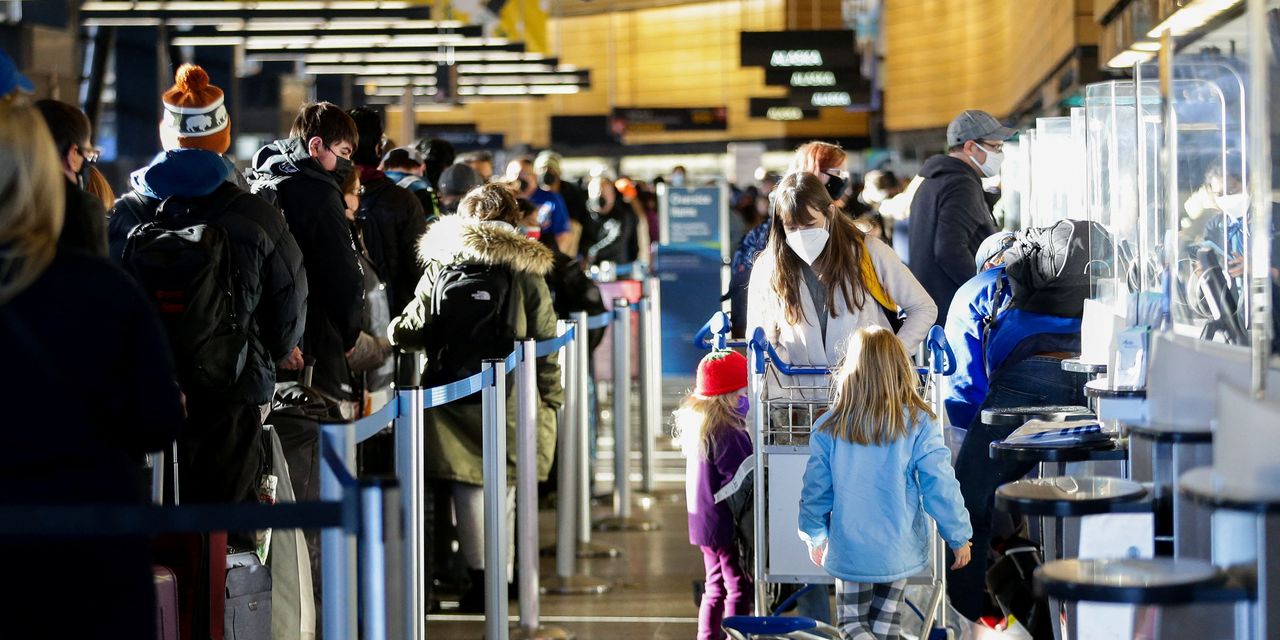 At JetBlue Airways Corp. leaders felt confident entering the Christmas season. The airline had flown through Thanksgiving week with hardly any hiccups.

Then came the Covid-19s Omicron variant. With its headquarters in New York, which leads the country in new case counts, JetBlue was quickly overwhelmed. Daily sick leave more than quadrupled. On December 21, JetBlue canceled no flights. Four days later, on Christmas Day, it scrapped 12% of the schedule.

“Because of the exponential increase, you’re getting to a point where you are using up all available reserves,” said CEO Robin Hayes.

Airlines are struggling through one of the most serious and persistent mass cancellation incidents in the last decade, according to data compiled by FlightAware. US Covid-1[ads1]9 infections increased too fast for airlines to manage without stopping holiday travel, causing chaos for already stretched airlines’ workforce. The carriers are now considering how they can better handle what may continue to be a difficult period, at least in the coming weeks.

Airlines have canceled more than 1,000 daily U.S. flights for 13 consecutive days, including over 2,500 on Friday when another winter storm brought snow to Boston and New York.

Flights scrubbed from Christmas Eve to January 6 exceeded 24,000, about 7% of the number of airlines had planned to fly, according to the flight tracking service FlightAware.

For the airlines, the upheaval of the pandemic is entering a new phase. Unlike in early 2020, when terrified passengers canceled trips in large numbers, new variants bulge, but do not decimate the desire to travel. But the airlines are rebuilding operations. The dual challenges of increasing the number of employees reporting sick after being infected or exposed to Covid-19, and a series of severe winter storms that hit major hubs from Seattle to Chicago to Washington, DC, created the perfect conditions for travel chaos.

It became clear that a problem was under scrutiny early in the Christmas week, said Sara Nelson, president of the Association of Flight Attendants-CWA.

“Thanksgiving went smoothly. We had two things in mind: We did not have Omicron, and we had no winter storms, she said. “No one saw Omicron coming.”

The problem increased as more workers became infected. “I received reports that entire crews tested positive and that they are out of the country, in a place where they have no other crews. There is no way to get that plane back,” Nelson said.

was the first to flag the potential for disruption. CEO Ed Bastian, along with the airline’s health director and medical adviser, asked the director of the Centers for Disease Control and Prevention on December 21 to consider halving the recommended isolation period for fully vaccinated individuals with a breakthrough Covid-19 infections. They mentioned the potential shortage of labor and new information about the Omicron variant. JetBlue followed with his own letter a day later.

Airlines had been under pressure from both travelers and lawmakers to deliver a steady holiday season after the crash last summer and fall. Airlines including Southwest Airlines Co.

at times struggled to maintain the buffer needed to quickly recover from storms or other disruptions, resulting in thousands of canceled flights.

was among the airlines that have had the toughest problems in recent weeks. But almost no airline arrived completely unharmed.

“It has been one of the most difficult operating environments we have ever encountered, and it forced us to cancel hundreds of flights as a result,” Delta’s customer experience manager, Allison Ausband, wrote to her frequent flights on January 5. Delta said Thursday that a new round of storms heading northeast will likely result in hundreds of cancellations.

Airlines are not alone in meeting shortcomings as the Omicron variant tears through the workforce. Public transportation in New York and other cities has been disrupted. Retailers, bars and restaurants have had to close or limit opening hours temporarily. School closures are at their highest point in the academic year as teachers report sick.

Airlines operate under strict safety rules that can give them little option other than canceling flights when they lack employees in the right places. Pilots are not always trained to fly multiple types of aircraft, for example. The regulations state how much rest crews must get between shifts. And employees such as air freight forwarders and mechanics can take on just as much extra work safely.

William Humphrey, 35, had hoped to return on New Year’s Day from a family visit to Omaha, Neb. Due to the weather, United canceled his flight and rebooked him until January 2. He took a refund instead and switched to a faster route with Delta, but that flight was also canceled, as were two more of his Delta flights on Monday.

Dr. Humphrey, a resident doctor who works in Burlington, Vt., Worried about finding coverage in his already short-lived office. On Tuesday, when a delay on his flight from Omaha to Detroit caused him to lose the connecting flight home to Burlington, he instead ordered a flight to Albany, NY, rented a car and drove the rest of the way, a three-hour trip.

“It seems like it’s getting more and more chaotic,” he said.

Airlines are preparing for the difficulties to last for at least a few more weeks. Alaska Air Group Inc.

said Thursday that it will reduce Alaska Airlines flights by 10% by the end of January, citing a unique frequency of employee sick leave due to Omicron and the need to find a way to navigate Covid-19 as a “continuing reality” in our business and our world. “

“This will give us the flexibility and capacity needed to reset,” the airline said in a statement.

Southwest said that through Jan. 25, it will offer pay incentives, including up to double pay for working extra shifts, to employees such as flight attendants, customer service representatives and mechanics. Southwest canceled more than 2,500 flights this week, including more than 500 on Friday – 17% of the flights scheduled that day, according to FlightAware, as Omicron-related sick leave made it harder to recover from severe weather such as a major snowstorm that hit Washington , DC, early this week.

A spokesman for the airline said Southwest is focusing on stabilizing operations in the wake of the winter storms, while maintaining adequate staffing as Covid-19 cases increase.

Carriers usually maintain higher staffing levels as a buffer against bad weather and other unexpected events during the busy holiday season – when demand is high and staff tend to increase even in the best of circumstances – said Geoff Murray, a partner at consulting firm Oliver Wyman . Airlines are still demanding to hire more employees, he said, with regional airlines suffering from a shortage of pilots and large airlines struggling with training stops.

What has been your recent experience of traveling by plane? Join the conversation below.

“There was not much slack in the system,” Murray said. “The only options the airlines had was to cut additional schedules into the holiday. With the booking levels they looked at, it would be very difficult to do.”

At United, the number of sick pilots, including those with Covid-19, those waiting for test results and those with other diseases, rose to around 900 this week from around 500 shortly before Christmas. And the number of pilots with active Covid-19 infections more than doubled to nearly 500 during that period, according to a union spokesman representing United.

The airline rushed to increase the pay for pilots willing to take extra trips, with dealers working after midnight on December 31 to make an incentive deal offering up to triple pay for certain trips. United has not shortened the 10-day quarantine period for pilots and flight attendants who become ill from Covid.

While airlines are still canceling flights, they are likely to receive some relief from the typical travel decline after the winter holidays. Airlines tend to operate fewer flights in January than at the end of December. Airports screened 1.5 million passengers on Thursday, withdrawing from daily heights of more than 2 million at the height of holiday rush, according to the Transportation Security Administration.

“I think we will start to see more people coming back to work than calling,” said JetBlues Mr. Hayes. “And I think that will allow us to recover very quickly from mid-January onwards.”

—Stephen Council contributed to this article.

Write to Alison Pages at alison.sider@wsj.com