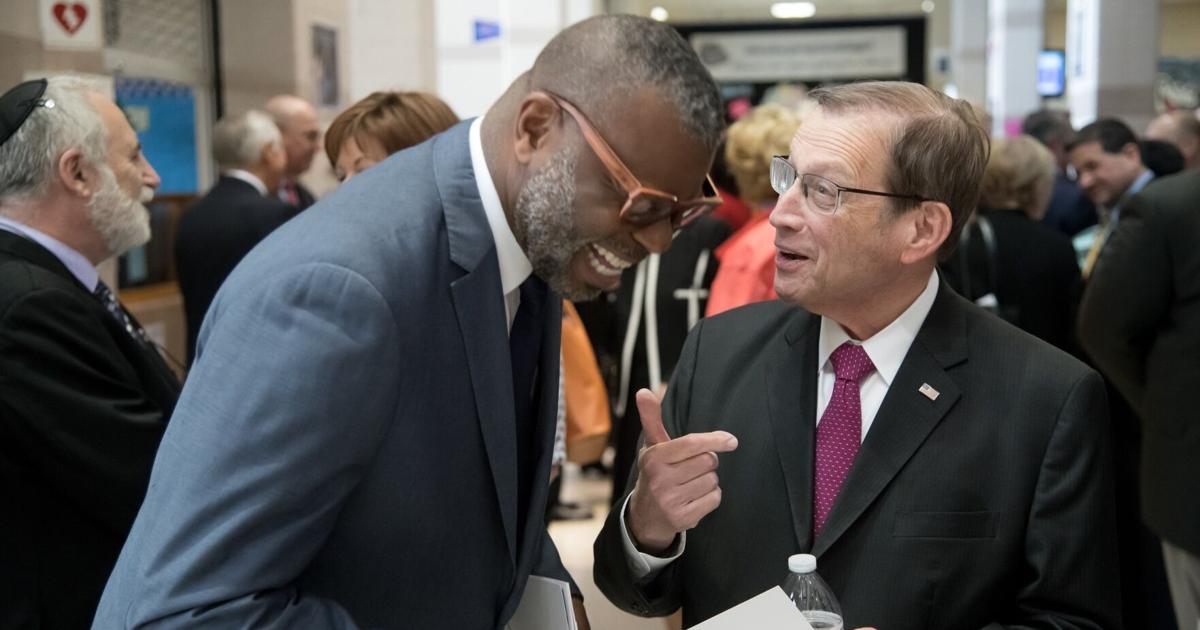 CLAYTON – Longtime Centene Corp. leader Michael Neidorff, a pillar of the St. Louis business community, died on Thursday at the age of 79.

Neidorff led the Clayton-based company for 26 years, growing it from a small health care firm into a Fortune 25 behemoth – and the largest company headquartered in the region. He and Centene injected millions of dollars into charities here. And he sent shockwaves through the area when he challenged local leaders to do more about crime.

Former Clayton Mayor Harold Sanger, who worked closely with Neidorff while the company built and then expanded its headquarters in the city̵[ads1]7;s business district, called him “instrumental” in Clayton’s growth and a “magnificent human being.”

Sanger recalled Neidorff calling him at 11 pm one night after 18-year-old Michael Brown’s death sparked protests around the region to say he had gotten board approval to build a Centene call center in Ferguson, which included a child care center for workers.

“Who would do that?” Sanger said. “Only Michael.”

Neidorff was born in 1943, and grew up in Altoona, Pennsylvania. He received a bachelor’s degree from Trinity University in San Antonio, Texas, and a master’s degree from St. Francis College, in New York.

The company that eventually became Centene was founded in 1984 in Milwaukee, Wisconsin, as a nonprofit Medicaid plan by the name Family Hospital Physician Associates. Neidorff was named president and CEO in 1996, and expanded the company into Indiana.

The following year it was renamed Centene Corp., and established its corporate office in St. Louis.

In the decades that followed, Centene grew at an expansive pace, with revenues last year totaling $ 126 billion. The company bought up subsidiaries across the US, including rival WellCare Health Plans Inc. in a $ 17.3 billion deal in 2020. The acquisition expanded Centene’s footprint to 50 states – from three in 2001.

Under Neidorff’s tenure, Centene has also been a philanthropic force in the St. Louis region.

In 2016, Neidorff opened a $ 25 million state-of-the-art Centene office in Ferguson with a preschool for employees’ children. Centene also donated more than $ 1 million to open a health clinic in Ferguson.

In 2017, Neidorff was named Citizen of the Year, an honor sponsored by the Post-Dispatch and selected by a committee of past winners.

In July of 2020, Neidorff became a lightning rod in the St. Louis region after Centene announced plans to spend $ 1 billion to build a 6,000-employee East Coast headquarters in Charlotte, North Carolina. In interviews after the announcement, Neidorff suggested that Centene could have expanded here, but recruitment was hampered by the region’s problems, including crime.

But in February, the company extended an olive branch, buying 15-year naming rights to the Major League Soccer stadium here.

Neidorff had intended to retire from Centene this year. He had been on a medical leave of absence for six weeks. He passed away Thursday, “after a lengthy illness,” the company said in a statement.

“There will never be another Michael Neidorff,” he said. “He has been overwhelmingly instrumental in some of the most significant things we have done as an agency.”

Neidorff helped finish the local capital campaign for the group’s Ferguson center, built on the site of the QuikTrip that burned in the 2014 civil unrest. He served as chair of the national Urban League from 2014 to 2019. And he co-chaired the effort to bring the national conference to St. Louis in 2017, pledging a $ 1 million gift for the effort.

McMillan said Neidorff recently donated $ 1 million so the Urban League could purchase the land adjacent to its new regional headquarters on North Kingshighway Boulevard “so that we could have an entire campus for north St. Louis and the Black community.”

But he began stepping back from his work at Centene several months ago.

In July 2021, Centene established a three-person office of the president, which included Neidorff, current CEO Sarah London and Brent Layton, now Centene’s president and chief operating officer. That same month, the company later disclosed, Neidorff had informally notified the board that he may step down before the end of his contract for personal reasons.

In December, Neidorff announced that he intended to retire by the end of 2022.

In February, the company disclosed that Neidorff was taking a medical leave of absence. On March 22, London was appointed CEO.

“On behalf of the 75,000 employees of Centene, I want to express our deepest condolences to Michael’s family and loved ones,” London said. “Michael’s passion lives within the women and men of Centene, and his commitment to the mission of transforming the health of America’s most vulnerable citizens lives on.”

Neidorff was husband to Noémi Neidorff, father to Peter Neidorff and the late Monica Neidorff, and brother to Susan Neidorff Reinglass and Robert Neidorff.